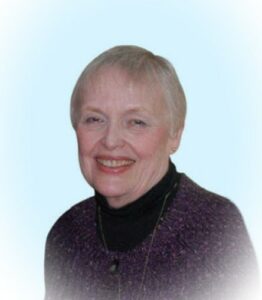 Born in Waltham, the daughter of the late Esmund and Harriet Bailey, Carol graduated from Sudbury high school and attended Framingham Union School of Nursing (3 12-month years) to become a registered RN. Carol worked at Framingham Union Hospital (MetroWest Medical) for 25 years in the maternity ward. She cared for mothers and babies and supplied grief support for those parents who lost infants at birth. In later years, she worked for 5 years for an obstetrician in Southborough, followed by 3 years as a substitute nurse in the Harvard Public Schools.

Carol was an avid reader and lover of arts. She sang in her church choir and gave her time to the parish and surrounding community. She loved listening to jazz, cooking, crocheting, and walking in the woods with Ray and their dogs. She loved being with family.

Friends and Family are invited to celebrate Carol’s life by gathering at Britton Funeral Home, 648 Main St., Shrewsbury on Tuesday, February 1, 2022, from 10 – 11 AM, with a service at 11. Interment will follow in Mountain View Cemetery, Shrewsbury.

In lieu of flowers, donations can be made to the American Heart Association in honor of Carol B. Ayer and her son Andrew B. Holmes.