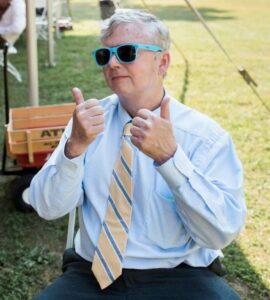 Marlborough – It is with great sadness that we announce the passing of Gregory John O’Brien, age 76, of Marlborough, Massachusetts, on February 9, 2022.

Greg was born on April 20, 1945, to Effie and John O’Brien in Drexel Hill, Pennsylvania. During his youth, his family lived in Darby and Gulph Mills, PA, the Chicago suburbs, and St. Louis, MO, before returning to King of Prussia, PA. Greg graduated from Upper Merion High School in 1963, where he was captain of the swim team, wrote for the school newspaper, and was known as “Obie” to his many friends. He spent his summers with his grandparents at Thousand Island Park on Wellesley Island and it remained one of his favorite places. His siblings, Matthew and Tracy, remember Greg as a loving and protective big brother and an engaging storyteller. He was always there for them with advice, comfort, and encouragement in their interests and careers.

Greg married his high-school sweetheart, Anne Elaine Kindig, in 1966 in King of Prussia before they moved to West Berlin, Germany. Greg served in the Army Security Agency in Berlin from 1966-1969. After returning from Berlin, Greg and Anne both graduated from Penn State University with bachelor’s degrees in 1975. They moved to Massachusetts in 1978, where they lived together for the rest of his life. Greg worked for many companies as a computer programmer and software engineer for most of his career, and then as a software contractor for 28 years through his own company, Appropriate Software, Inc.

Gregory and Anne raised two devoted daughters, Erin Anne and Jenny Alyssa. A voracious reader, Greg instilled in them a love of learning, curiosity, and a respect for books. He taught them to love jazz, The Beatles, and that “You never turn off the radio if Elvis is playing”. Some of his favorite memories were traveling with his family and he loved being able to revisit Berlin with his wife and daughters in 1997 and again in 2000 for his Army reunion.

A man of few words, Gregory was content in the presence of others, always lending a sympathetic ear and insightful remarks. His formidable intellect and breadth of knowledge were hard to match. He was modest to a fault, barring a well-placed compliment regarding his pumpkin or apple pies, holiday favorites. He surprised everyone by choosing “Play That Funky Music” for his father-daughter dance at Erin’s wedding, where he danced the night away. He was a loving grandfather to Everett and Adeline.

During his retirement years Greg remained curious, always trying new hobbies and keeping up with the latest technology and coding languages. He shared an interest in sustainable farming and permaculture with his brother Matt, and kept a home garden including milkweed to support Monarch butterflies. One of Greg’s many hobbies was ham radio, carried through from childhood, and he was a licensed testing administrator. He loved the color green (particularly lime green) and surrounded himself with it, starting with a custom-painted Volkswagen in Berlin. Greg worked as an auto mechanic in the early 70’s for a showroom stock racing driver and his love of Formula 1 and Grand Prix racing, and cars in general, was lifelong.

Greg is predeceased by his parents, John Edward O’Brien and Effie Williams MacDougall. He is survived by his wife Anne Kindig O’Brien, his daughters Erin O’Brien Ingraffia (Roy) and Jenny O’Brien (Oisín), his grandchildren Everett and Adeline Ingraffia, who meant the world to him, and his siblings Matthew O’Brien (Janice) and Tracy O’Brien and two nieces.

He is deeply missed by his friends and family.

A private service will be held at a later date.

In lieu of flowers, donations can be made to Save the River (https://www.savetheriver.org/donate/), the Thousand Islands Land Trust (https://tilandtrust.org/support), or Save Our Monarchs (https://www.saveourmonarchs.org/store/c2/Make_a_Donation.html).