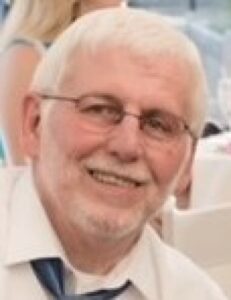 Paul was the son of the late John and Dorothy (Avey) Ladden and pre-deceased by his siblings Yvonne, Michael, and Donald Ladden.

Paul was born and raised in Marlborough where he grew up playing baseball in the streets with his siblings and neighborhood kids. He enjoyed reading library books and eating candy while sitting up in his favorite tree. He compared his childhood to scenes from “The Sandlot” or “Stand by Me”.

He served in the United States Airforce, most notably spending a considerable amount of time in Taiwan. Paul put himself through college and became the first in his family to earn a college degree. He had a long and productive career which included roles in management consulting, project management and software training.   He worked at Digital Equipment Corporation for almost 17 years and worked for other well-known companies such as Bearing Point, Fidelity, and eClinicalWorks throughout his career.

Paul was happiest outdoors and loved golfing, fishing, biking, and camping. Summers were spent camping in the white mountains with friends and later with his children and grandchildren. Favorite camping memories include long hikes with no food or water, eating his favorite camping food – Spam, tipping canoes, and spending countless hours playing board games as the rain pelted the tent. Paul loved a hot cup of coffee, a big breakfast, a good book, politics, crisp fall days and music.

Above all else, Paul’s greatest loves were his children and grandchildren. He watched or coached countless basketball, soccer and baseball games and had his folding chair, used for spectating, in the trunk at all times. He gave them the gift of an unwavering belief in their goals, dreams and plans. He loved his kids unconditionally and felt pride at the “wonderful people you’ve become”.

He will be missed in a way that words fail to capture!