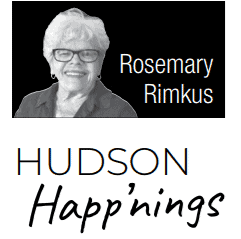 Qualified riders from Hudson and surrounding towns vied for a chance to compete in the zone finals at the “Big E” in Springfield in April.

Ms. Sukis is owner of the Maple Grove Farm riding school and the coach of high school and middle school teams.

Coach Sukis explained that local riders earn points during their regular show season enabling them to enter regional shows. Top riders from 10 various regional zones go on to nationals, which are held each year in a different state.

The stunning commemorative piece, done in watercolor and sumi ink, was one of 11 pieces selected for  exhibit by the Guild, which includes 500 members.

A graduate of  Framingham State University, and a Framingham teacher for a few years, Ms. Kerdok began taking lettering classes during maternity leaves.

Her 44 years of classes include studies at the Danforth Museum, the International Assemblies of Lettering Artists, Masscribes and, more recently, online Zoom classes.

As a member of “Scribbled Lives,” an international lettering group, she pledges to complete a piece each week.

The local lettering artist taught children and adults at the Worcester Art Museum for 23 years. The wife of Richard Kerdok for 53 years, Ms. Kerdock and Mr. Kerdock reside in Meadowbrook Park in Hudson and Falmouth. They have two married daughters and a grandson.

This artist is very generous locally with her talents, and her work is seen on many commemorative plaques, scrolls, program covers, etc.

Hudson resident Jean Luther, who observed her 90th birthday on Valentine’s Day, Feb. 14, was surprised with a celebration of the event at First United Methodist Church on Sunday, Feb. 13.

A resident of  Hudson since 1966, Mrs. Luther has one daughter, Deb Kauffman; two sons, Bob and Doug Luther; five grandchildren and four great grandchildren. The active nonagenarian is still driving and continues to enjoy life.

Bank is in need

Fresh Start Furniture Bank at 16 Brent St. has been busy supplying furniture and other household goods to families, many of whom are moving to permanent housing after staying at shelters and hotels during emergency situations.

Couches and glassware sets are in particular need. Donations are accepted, without appointment, every Saturday from 8:30 a.m. to 10:30 a.m. at the Brent Drive address. For further information go to  www.freshstartfurniturebank.org.

Applications are now available for Hudson Community Garden’s 2022 season, which marks its 11th year at the Port street location.

Local residents  of all ages are encouraged to join the volunteer group, growing their own food, giving back to the community and meeting new people. Apply by emailing [email protected].

Meet the Mill on March 5

The public is invited to the “Meet the Mill Winter Market” at The Landing at Hudson Mills at 43 Broad St. on Saturday, March 5 from 10 a.m. to 4 pm.

The Landing now houses 60 small and medium sized businesses and organizations, including restaurants, and shops selling everything from jewelry to formal wear to vintage items and more. Masks are encouraged and an elevator is available.  For more information, go to www.meetthemill.com

One-way signs were installed at corners of  Main and Pope streets, and Main and Church streets.

Milford Davis was advanced to the rank of  Major in the U.S. Air Force.