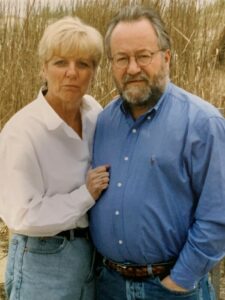 Hudson – David William Morin, 74, of Hudson, MA passed away peacefully at his residence on Sunday, February 27, 2022. He is reunited with his beloved wife of 40 years, Marylyn, who predeceased him in 2017.

David was born in Marlborough, MA, son of the late Eloie and Doreen (Walker) Morin. He graduated from Marlborough High School in 1966. He was a long-time resident of the Hudson area for more than 40 years, where he met and married his best friend, Marylyn, on July 28, 1977. David also attended the Museum of Fine Arts in Boston, where he would begin his career path as an artist and sculptor.

David was well known for having won numerous awards, medals and ribbons for his detailed, authentically hand carved water fowls/duck decoys. His love for art, sculpting, and the outdoors allowed him to create beautiful life-like pieces. His art skills and passion for cars combined to lead him to his love for model car building too. He was also an avid fisherman and outdoorsman and absolutely loved spending time in Chatham, MA. It was like his second home.

He leaves his son Joshua D. Morin and his wife Wilaiwan of Millbury his son Jason E. Morin of Easton. He leaves his brother Donald Morin and his wife Christine of Franklin. He leaves behind his nephew Garrett Morin. He also leaves behind his step-son Scott Fletcher of Florida and 2 step-daughters Darcy Perkins of Maine and Amy Fletcher and her husband Mike Handlin of Plymouth. He also leaves behind 3 grandchildren; Julianna, Devin and Marcus Morin. Along with his parents, he is predeceased by his loving wife, Marylyn Bliss (Kirsman) Morin.