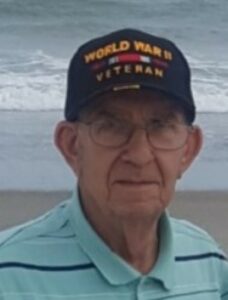 Marlborough – Norman Paul Gaulin, 95, of Marlborough, MA, passed away peacefully on Friday, February 25, 2022, in his home with his family at his side. He is survived by his beloved wife of 75 years, Shirley.

Norman was born in Shrewsbury, MA, one of five children of the late Alfred Gaulin and Valerie (Phaneuf) Gaulin. Before graduating high school, he wanted to support his country during WWII and joined the NAVY where he became a Radioman and Navigator in the Navy, Air Force. After his service, he completed his GED at night school, while working to support his family. After

proudly serving in the US Navy, Norman returned home and married the love of his life, Shirley. Together they raised their four children in Marlborough.

Norman was employed at Fenwal Inc. for most of his adult life until retirement. After retirement, he enjoyed traveling with Shirley and spending winters in Cape Canaveral, Florida. He had a passion for flying and often took family and friends on short flights out of Marlborough Airport. He also enjoyed going deep sea fishing out on his boat. He will fondly be remembered as a real handyman. He could fix just about anything. He was always willing to lend a helping hand to anyone who needed it. He loved his family and especially loved his grandchildren and great-grandchildren.

He leaves behind his four children, Norma Serra and her partner Jim Morin of Marlborough, Donald Gaulin and his wife Susan of Chandler, Arizona, Julie McNiff and her husband Edward of Shrewsbury, and Denise John and her fiancé Michael Paschen of North Grafton. He also leaves behind eight grandchildren and eight great-grandchildren, who he loved and cherished. In addition, he leaves behind his brother Ronald Gaulin and his wife, Lynda of Lancaster. Along with his parents, he is predeceased by his siblings, Wilfred and Blair Gaulin and Lorraine Garceau.