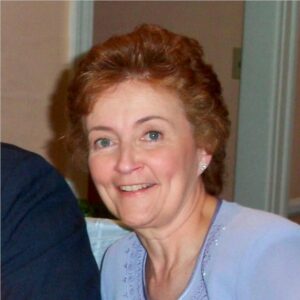 Plymouth – Anne Marie Kelly McHoul, of Plymouth, passed away peacefully at her home on Thursday, March 3, 2022 surrounded by her loving family.

Born in Boston, MA she was the daughter of the late Matthew P. Kelly and Ann M. Feeney Kelly.

Anne grew up in Brighton and resided for many years in Dorchester, Marlborough and most recently Plymouth.

She was a graduate of Our Lady of the Presentation High School in Newton before earning a degree in funeral service and embalming from the New England Institute in Boston. She was a trailblazer as one of only two women in a class of 56 students, who graduated from NEI in 1967.

Anne worked for many years alongside her late father-in-law, Alexander F. McHoul, as a licensed funeral director at the McHoul Funeral Home in Dorchester. She was a kind, gentle and strong woman, always providing support and guidance to the families she served. Anne also worked in the medical field for many years before her retirement.

She was a devout Catholic and longtime parishioner of St. Mary’s Catholic Church in Plymouth. Anne enjoyed nurturing the birds especially the Hummingbirds as they arrived in the spring each year and loved sharing tips on bird feeders and landscaping that increased the amount of birds that would visit. She loved spending hours in her garden tending to her plants and was known by her friends to be able to whisper life back into those that others had given up on. Friends began dropping their plants that needed help to Anne which she would miraculously bring back to life. Anne loved her country and instilled that loyalty in all those that surrounded her. She was also an avid Red Sox and Bob Dylan fan. Her most cherished moments were those spent with her treasured grandchildren.

Anne is survived by her two devoted daughters, Kelly A. Doyle and her husband Paul Doyle of Plymouth and Kary Mildred McHoul Gatens and her husband Terry Gatens of Los Angeles, CA; her adored grandchildren, Eamonn P. Doyle, Niamh E.A. Doyle and Emmet D. Doyle all of Plymouth and Cooper Eugene McHoul Gatens and Beau McHoul Gatens both of Los Angeles, CA; her two loving sisters, Sister Maureen Kelly, IHM of Ciudad Juárez, MX and Kathleen F. Kelly of Plymouth; she is also survived by her extended family and many loving nieces, nephews and cousins.

The family would like to extend their deep gratitude to all the staff at Cranberry Hospice of Plymouth for their kindness and devotion in Anne’s final days.

Relatives and friends are invited to attend a visitation from 3-7 p.m. on Thursday, March 10, 2022 at the McHoul Family Funeral Home, 354 Adams Street, Dorchester, MA.

A Mass of Christian Burial will be held at 10 a.m. on Friday, March 11, 2022 at St. Ambrose Church, 240 Adams Street, Dorchester. Burial will follow at Evergreen Cemetery, 2060 Commonwealth Ave, Brighton.

Donations in memory of Anne may be made to Wounded Warrior Project at https://www.woundedwarriorproject.org/.