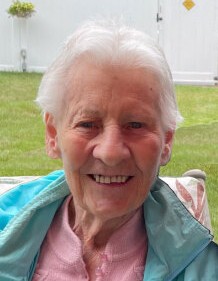 A 1947 graduate of Wellesley High School, Jean went on to Lasell Junior College and enjoyed several classes. While through the years she had a variety of jobs, she found her true place as a homemaker. Jean was a no nonsense, loving mother who took great pride in her family. Some of her favorite past times were reading romance novels, bowling, playing cards with friends on Saturday nights and vacations on Cape Cod. A true New Englander Jean was an avid Patriots Fan and loved discussing the game with her grandson Sam. In Jean’s later years, she enjoyed the companionship of the family rescue dog Emma. It wasn’t always easy to tell who rescued who, but they sure provided much comfort to each other.

If anyone finds any discrepancies in the facts provided here, Jean would like to tell you, “WHATEVER!” — This had to be her favorite statement.

A private graveside service will be held for the immediate family on a later date at Edgell Grove Cemetery – 53 Grove Street, Framingham, MA 01701.

Donations in her memory may be made to the Massachusetts Commission for the Blind, by mail, to MCB Chief Financial Officer, 600 Washington Street, Boston, MA 02111.

The Slattery Funeral Home of Southborough assisted with arrangements.