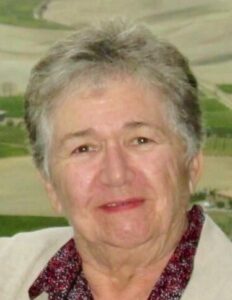 She leaves behind her three daughters: Elizabeth McPherson of Lunenburg, MA, Alison Maltese of Arvada, CO, and Gretchen Borzi of Merrimac, MA; her sons-in-law Mark McPherson, Dean Maltese, and Patrick Borzi; her grandchildren Kenneth McPherson, Rachel McPherson, Alex Borzi, and Natalie Borzi; her sister Mary Ann Mauro, a large extended family, and many friends. She is predeceased by her parents Antonio and Mary Masciarelli (Delmonte) and grew up in Hopkinton, MA.

Born in Quincy, MA, Anita most recently resided in Fort Myers, FL and spent summers on her beloved Cape Cod.

After graduating from Hopkinton High School in 1961, she attended Leominster School of Nursing, obtaining her RN in 1964.

In 1965, she and her husband married and began raising their family, in Marlboro, MA, where she lived for the next 38 years.

During that time, she was employed as a nurse in many nursing home facilities in the MetroWest area. She also worked in private nursing care, as a city health nurse, and as a nurse in several local schools including Hillside School and Assabet Valley Regional Vocational High School.

As a former First Lady of Marlboro she started the First Lady’s Harvest Golf Tournament to benefit the local food bank, Marlboro Library and Senior Center, and other Mayor’s charity funds.

In 2004, she moved to Fort Myers, FL where she was actively involved with the women’s golf league, the community chorus, and enjoyed the friendly competition of playing trivia and poker with her many friends.

She was a talented golfer who enjoyed competition and camaraderie playing in several leagues and winning many tournaments as a member of Marlboro Country Club, Dennis Pines and Highlands Golf Courses on Cape Cod, and Seven Lakes Golf Community in Fort Myers, FL. She was also an athletic youth who would fondly recount the memory of playing in her high school basketball state championship at the Boston Garden. That love of sports continued throughout her life as she followed the Boston Red Sox and New England Patriots each season.

Anita loved to garden, providing beautiful flowers for all to enjoy. She enjoyed attending music and musical theater performances at the Cape Cod Playhouse and in the Fort Myers area regularly. She loved the ocean and swimming, and spending time with her family, friends, and grandchildren. She also enjoyed reading, having her nightly scoop of ice cream while watching Jeopardy, playing all kinds of board games, horses and Western movies and TV shows. Throughout the 1970s and ‘80s, she participated in the League of Women Voters, and volunteered as a CCD teacher and Girl Scout Troop leader.

Visiting hours will be held on Friday, April 8 from 4-7pm at Slattery Funeral Home, 40 Pleasant St., Marlborough, MA. A private graveside service for Anita will be held.

In lieu of flowers, the family is requesting donations be made to the VNA of Cape Cod Hospice or Hope Hospice of Fort Myers, FL.