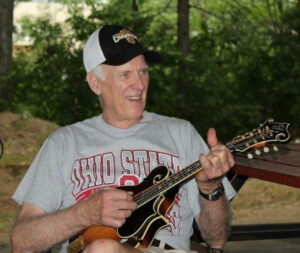 Hudson – Charles S. “Sam” Butts, age 89, longtime resident of Hudson, MA, died Tuesday May 3, 2022 at his home surrounded by his loving family. He was the beloved husband of Beverly A. (Paulis) Butts, who died in 2012.

Sam was born in Bethel, Ohio, son of the late Oscar Harlan Butts and Anna Lorena (Sharpe) Butts. Following his graduation from high school, he enlisted in the U.S. Navy and served aboard the aircraft carrier USS Gilbert Islands during the Korean War. He married his wife Beverly in 1955 and resided initially in Somerville, MA before moving to Hudson in 1963.

Despite working two jobs while his children were young, Sam was very active in the community. He was member of the Knights of Columbus, coached Hudson Youth Hockey and Little League Baseball, and lead two different children’s musical groups; the Harmonica Hobos and St. Michael’s Parish Folk Group.

He worked in the aerospace/electronics industry as a mechanical design engineer for several companies including Raytheon, Data General, and Digital Equipment Corporation. He owned and operated Small Engine Service Center in Hudson from the mid 1970’s to the mid 1980’s.

He was a multi-talented person with many diverse interests including wood carving, stained glass, hunting, hiking, fishing, boating, golf, and scuba diving. He spent the summer of 1985 at a gold mining camp in Nome, Alaska where he went hiking and fishing during in his spare time, surviving one exciting encounter with a grizzly bear.

Sam was a talented musician who sang, played the guitar, banjo, mandolin, and fun improvised percussion instruments like the spoons and washboard. He could fix absolutely anything, whether mechanical, electrical or automotive. He was a skilled builder and carpenter who did many building projects at his grown children’s houses in Massachusetts, Maryland, California, Colorado, and Hawaii.

Sam was a devoted father and father-in-law to his four children and their spouses: Kathleen Leavitt of California, Ellen and Jonathan Howland of Falmouth, MA, John and Tricia Butts of Colorado and Robert Butts of Hudson. He is survived by his sister Lois Bernasek of Geneva, Nebraska. He doted on his nine grandchildren and many nieces and nephews who, along with all his friends, dearly loved him and will miss him.