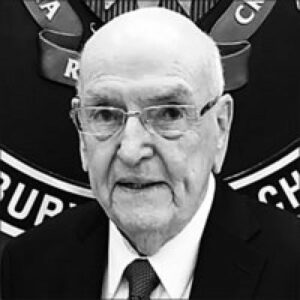 Born in Lowell, Massachusetts on May 5, 1929, Brother Conal was the son of Daniel and Sarah (Finucane) Owens. He attended St. Michael’s Elementary School and Keith Academy, both in Lowell, transferring in his junior year to St. Joseph’s Juniorate in Peabody to prepare for his religious life in the Congregation of the Xaverian Brothers. He earned a bachelor’s and a master’s degree from Boston College and was also awarded an honorary doctorate by Assumption University in Worcester.

After his tenure at St. John’s, Brother Conal introduced a new model of school sponsorship and organized the first board of trustees at Venerini Academy, Worcester, and served as a longtime consultant and advisor for the Academy. Brother Conal shared his respected skills in several capacities with the Diocese of Worcester.

A faithful Xaverian Brother for over 75 years, Brother Conal served his religious community as chairman of the board of trustees at Xaverian Brothers High School in Westwood and at Malden Catholic High School. In addition, he was a member of the provincial council of the American Northeastern Province of the Xaverian Brothers, and on the finance committee for the Congregation.

Brother Conal leaves his sister Eleanor Belanger; wife of the late André Belanger; a nephew Brother Brian Conal Belanger O.F.M.; a nephew Richard Owens; a nephew Philip Belanger and his wife Leona; a niece, Andrea Stanislaw and her husband Joseph Stansilaw; and a niece Joanne Belanger; also a grandniece and four grandnephews, Monica, Garrett and Ian Martel, and Bernard and Joseph Belanger. He was predeceased by his brother and his sister-in-law, Edward J. and Helen Owens; and a niece Sheila Owens.

The Mass of Christian Burial will be celebrated on Tuesday, May 17, at 9:30 a.m. in the Coaches Pavilion at St. John’s High School, 378 Main St., Shrewsbury. The Xaverian Brothers request that masks be worn at the Mass. Burial in the Xaverian Brothers Cemetery in Danvers will be private. Calling Hours will take place in the Pavilion on Monday, May 16, from 4 to 8 p.m.

In lieu of flowers, contributions in Brother Conal’s memory may be made to the Xaverian Brothers Retirement Fund, 4409 Frederick Avenue, Baltimore, MD 21229.