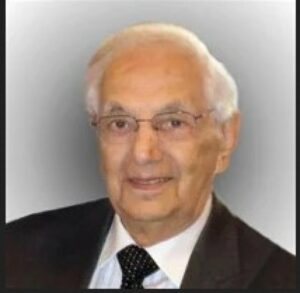 Westborough – James Zographos, of Westborough, passed on Tuesday, May 10, 2022, at the age of 102. With his family at his side, Jim left this earth as he lived, with dignity and grace. Not only was he a gentleman’s gentleman, he was a gentle man. He had a quick wit, loved a good joke, and would often mail hand-typed notes and funny quips to family and friends.

Raised in South Boston, Jim was born on July 23, 1919, in Springfield MA to Anthony and Sophia (Madamas) Zographos. He was the older of their 2 sons; his brother Peter, predeceased him in 2001. Widowed in her 30’s, Sophia did all she could to provide a stable and loving home to her boys through many lean years and the depression. In turn, Jim and his brother did what was necessary to support their mother. As a proud Greek woman and mother, she was able to witness her sons become successful business owners in their own right.

At 20 years of age, Jim graduated from the Mass. College of Pharmacy, working to fulfill his career as a pharmacist. Drafted in 1942 he was assigned to the infantry in the US Army. Soon after he would transfer to the Army Air Force (Air Corp) where he trained to be a pilot before becoming a bombardier on board the B-17. Rising to the rank of first lieutenant, he was assigned and served the 8th Air Force, flying 50 missions over France and Germany and was wounded twice in combat.

Amongst his numerous medals and citations for his service to his country, Jim received 6 Oak Clusters; the Distinguished Flying Cross; the European, African, and Middle East Theater Medals; 6 Bronze Stars; and a Purple Heart Air Medal. In 2002, he was presented with the Normandy Medal of the Jubilee of Liberty by Congressman James P. McGovern. Then in 2014, he was presented with the France’s Legion of Honor Medal by the French Counsel General at a special ceremony in the WWII Museum, in Natick. He was a member of the American Legion – George K. Menichios post #324. On the occasion of his 100th birthday, Jim received the Quilt of Valor.

In his later years Jim would become actively involved in his 388th Bomb Group Association, attending several reunions across the country and proudly served as it’s Director-at-Large since 2013.

During one of his furlough’s home, he met the love of his life, Eugenia Jouvelakis. They married in 1945 and relished their life together. They enjoyed traveling both here and abroad and most especially loved cruising to include several trips to Greece, South America, Aruba, and other islands of the Caribbean. They loved seeing the USA and enjoyed trips to include California, Hawaii, Florida, New Orleans, and Nashville just to name a few. Together, they were a couple to be admired. They loved entertaining, hosting many parties and family events at their home always with food, drink, and music. Jim and his “sweetheart” were married for 53 years before her passing in 1998. While he successfully forged a new life without her, he never stopped missing her and surely, he is thrilled at their now being reunited.

The ocean was Jim’s happy place. He loved to swim and spent countless vacations on the beaches of Cape Cod and Maine with his family. He was the ultimate family man, always putting his family first, always there to guide and offer help in any way needed. His home was his castle and a source of great pride, he would always and meticulously take care of it, both inside and out.

Jim’s career as a manager for the Liggett Rexall Drugstore Company is what brought him and his family to Worcester in the late 50’s to manage and eventually acquire Liggett’s Chatham and Main Pharmacy. Affectionately known as “Mr. Z”, he loved serving his customers, whether it was the local business regulars, his fellow church parishioners who relied on him for his expertise in their prescriptions or the indigent that came in knowing they could get a cup of coffee or a sandwich without judgement.

Anyone who knew Jim knows that his faith was everything to him. Deeply spiritual, he was devoted to the church and to his God. He served on the church board at St. Spyridon’s Greek Orthodox Cathedral in Worcester in his younger years, was a member of the Order of AHEPA and the American Legion. “Was it fate or was it faith?” is something he would quote throughout his life, whether it was during his military years and why he lived to come home and so many did not, or in times of joy or great sorrow. Often he would say “we don’t know the answers, but someday we will”.

Jim was an optimist. He loved life and living. He loved being an uncle to his many nieces and nephews and his four grandchildren were his pride and joy.

He will be forever missed by his three daughters, Antoinette M. Zographos, Joan E., wife of Thomas W. Christo, who he loved as his son, and Paula James. His legacy will live on in the lives of his grandchildren, William James Christo, Kathryn Lee Christo, and Robert James Meiczinger. In addition to his wife and brother, Jim was predeceased by his beloved grandson, Jason Tudorel Meiczinger in 2016.

Relatives and friends are invited to honor Jim and pay their respects from 4:00-5:00 pm on Monday, May 16, 2022, at St. Spyridon Greek Orthodox Cathedral, 102 Russell Street, Worcester. Appropriate face coverings are optional. A Memorial Service will follow at 5:00pm. https://www.spyridoncathedral.org/live-stream/watch.

The funeral for Mr. Zographos will be held at 11:00am on Tuesday, May 17, 2022, in St. George Greek Orthodox Church, 1130 Falmouth Road, Centerville, MA. A visitation hour will be held from 10:00 – 11:00am in the Church. Burial will follow in Mosswood Cemetery in Cotuit, MA. To view the livestream of the visiting hour and funeral, proceed to https://www.stgeorge-capecod.com/.

If you wish to make a donation in Jim’s memory, contributions may be made to St. Spyridon Greek Orthodox Cathedral, 102 Russell Street, Worcester 01609 or to St. George Greek Orthodox Church, 1130 Falmouth Road, Centerville, MA 02632.

Funeral arrangements are under the direction of Philip G. Haddad, Jr of Miles Funeral Home, 1158 Main Street, Holden. To share a memory or offer a condolence, please visit “The Tribute Wall.”

MAY HIS MEMORY BE ETERNAL