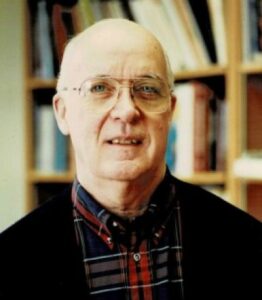 Shrewsbury – Edward “Ed” Cotter, PhD, Professor of Geology, Emeritus of Bucknell University in Lewisburg, PA, of the Southgate Community in Shrewsbury, passed away on Friday, May 13, 2022 surrounded by the love of his family. He was 85 years old.

He leaves his devoted wife of 53 years, Jacqueline (Lefort) Cotter; their loving daughter, Amy A. Cotter, of Cambridge; his sisters, Mary Diggins, of Norwell, and Margaret Marquardt, of Woburn; as well as fifteen Cotter nieces and nephews, and five Lefort nieces and nephews. He was predeceased by his sister, Eileen Reardon.

Ed was born to the late James J. and Mary E. (Carroll) Cotter in 1936. He was raised and educated in Chelsea, attending St. Rose School and Parish, where he did chores for the nuns and consequently developed a lifelong distaste for lemon meringue pie. He graduated from Chelsea High School (Class of 1954), serving as President of the senior class and Captain of the basketball team and the track team, which he helped to finish third in the state championships.

Ed began graduate school studying Geology at the California Institute of Technology, then transferred to Princeton University where he was awarded the Charles A. Munn Fellowship. He conducted his Ph.D. dissertation field research in Swimming Woman Canyon in the Big Snowy Mountain of Central Montana. Ed was awarded his Ph.D. degree in January of 1963.

After two years studying sandstones and recent carbonate sediments while based in Tulsa, OK, Ed’s college teaching career began in 1964 as a one-year sabbatical replacement in the Department of Geology at his alma mater, Tufts.

In 1965, he joined the Geology Department at Bucknell University, where he remained until his retirement in 2000. He received two teaching awards: the Lindback Award for Distinguished Teaching in 1973, and the Class of ’56 Lectureship for Inspirational Teaching in 1977. He was particularly committed to teaching introductory courses in geology, knowing that these courses would influence students’ lives by helping them to better understand the world around them and their place in it. Ed encouraged some of the these to major in geology, taught them sedimentology and paleontology, and supervised approximately 65 senior theses.

His research specialty was sedimentology, the interpretation of the origin of ancient sedimentary rocks. This involved studies in locations as varied as Pennsylvania, Montana, Utah, Mexico, Ireland, Australia, and South Africa, and resulted in numerous publications in professional journals. Sabbatical leaves from Bucknell made it possible to follow research interests in year-long visits with his family to Dublin, Ireland, Sydney, Australia, and Cape Town, South Africa.

After retiring, Ed worked to establish the Bucknell Institute for Lifelong Learning. From its first term of courses in Fall of 2009, he served as Director of that institute and it remained a passion of his to engage students of all ages and backgrounds.

In addition to sandstones, Ed’s primary interests included current events, world travel, keeping up with the Boston Red Sox, gardening, photography, Native American and modern art, and most especially, his family. Curious by nature, Ed and Jackie visited some 30 countries in their retirement.

In lieu of flowers, memorial donations may be to made to the Doctors without Borders organization: https://donate.doctorswithoutborders.org/secure/donate?type=tribute.

Relatives and friends are invited to visit with the Cotter family between 4 – 7 PM on Wednesday, May 18, 2022 at the BRITTON-SHREWSBURY FUNERAL HOME, 648 Main Street, Shrewsbury. Service and burial will be held privately.