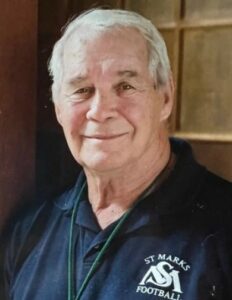 Henry was a 1958 graduate of St. George School of Newport, RI and lettered three years in football and baseball. In 1962 he graduated from Princeton University and won his freshman numbers in both football and baseball. Hank also lettered in both sports his junior and senior years and was awarded the Powell Cup.  He was president of the Semper Fidelis Society and the Tiger Inn eating club. Majoring in religion, Henry wrote his thesis on the cultural reasons for the popular and positive response to Martin Luther.

Upon graduation he served in the Marine Corps and after his tour of duty he was honorably discharged.

Henry started his career as a teacher and a coach in 1965 at St. Mark’s School in Southborough. Along the way he earned his Master’s degree in history at Northeastern University in Boston. In 2010 he retired from teaching but continued as assistant coach of the baseball and the football teams.

Henry is forever at peace on the baseball and the football fields and is carried in the hearts of countless people as he touched everyone he met.

All services will be private.

Arrangements are under the direction of the Morris Funeral Home, 40 Main Street, Southborough. To leave words of condolence to the family, please visit www.morrisSouthboroughfuneral.com.