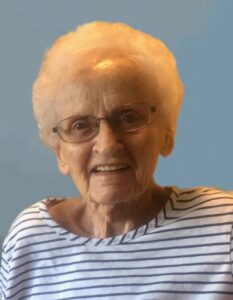 She was the daughter of the late Royal G. and Irene V. (Dudley) French. She was also predeceased by her brother, Royal French and her son-in-law, Richard Donohue.

After graduating from Marlborough High School, Class of 1944, she went on to graduate from Framingham State Teachers College in 1948 and eventually went on to earn her Master’s Degree in Education from Boston State College in 1970.

Working in the Marlborough School system throughout her career, Eleanor was a first grade teacher, the principal at the Hildreth School, Jaworek School and Richer School, opening all three schools and was the Title I Director of the District before her retirement in 1989.

Eleanor retired to Wells beach, ME, where she enjoyed golf with her dear friend Rosemary McCarthy. She also enjoyed entertaining family and friends at the beach and backyard barbecues. She became an active member in St. Mary’s Catholic Church in Wells Beach where she was a deacon. Eleanor was an avid golfer and was a prominent member of Cape Neddick Country Club in Ogunquit, ME, where she won many trophies and awards.

In 1997, Eleanor moved to Northborough to be closer to her family and became an active member of St. Bernadette Church in Northborough.

The family would like to thank the Staff at Beaumont in Northborough and Salmon Hospice for the care that was given to Eleanor.

In lieu of flowers, donations may be made to Second Chance Animal Adoption Center in Eleanor’s Name at www.secondchanceanimals.org