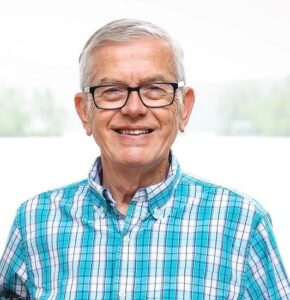 Born on December 5, 1944 in Worcester, MA, he was the son of the late Joseph G. and Evelyn Anderson Moller. He spent his early childhood at his parents’ hunting and fishing lodge in Lovell, ME, along with his grandmother, Nikolina Anderson, who taught him Swedish cooking and a few Swedish curse words. Robert was a veteran of the U.S. Navy, having served as a Hospital Corpsman during the Vietnam Era. He attended Clark University where he received a bachelor’s degree, and further pursued a master’s degree from the University of Kentucky and his PhD in cardiac electrophysiology from Worcester Polytechnic Institute.

He worked for the pharmaceutical companies AstraZeneca and Pfizer. He also taught and performed research at Harvard Medical School and Brigham and Women’s Hospital in the department of anesthesia, authoring over 400 published scientific research articles.

Robert and Regina raised their family in Shrewsbury, MA and East Lyme, CT, and upon his retirement, moved to Clinton, CT.

Faith and service were very important to Robert and he was actively involved with his church and his community. He served in many church leadership roles at the multiple churches he belonged to over the years including Trinity Lutheran Church in Worcester, MA, Mt. Olivet Church in Shrewsbury, MA, St. Paul Lutheran Church in Old Saybrook, CT, and he recently joined First Church of Christ Congregational in Clinton, CT, where he has already been volunteering weekly in the food pantry. He loved to sing and shared his beautiful baritone voice as a member of many church choirs and he delighted in any opportunity to sing karaoke.

Bob spent many years as Scoutmaster of Boy Scouts Troop 7 in East Lyme, CT, and was very proud that his three sons attained the rank of Eagle Scout. Aside from spending time with his family, he enjoyed country music, and watching all of his New England and Boston sports teams. His lifelong love of fishing and exploring the outdoors has been passed down to his sons and grandsons.

His tremendous gift of wit and humor is widely known and will be sorely missed by all, including his grandchildren who will miss hearing the joke of the day.

A memorial service with military honors will be held at 11:00 a.m. on Saturday May 28th 2022 at First Church of Christ Congregational, 55 Church Street, Clinton, Connecticut. Disbursement of ashes will occur in private at a later date.

In lieu of flowers, donations may be made in his memory to Noank Community Support Services. www.noankcss.org