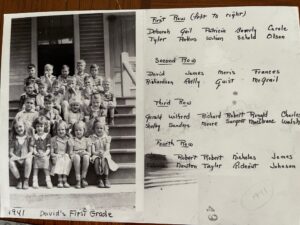 SHREWSBURY – As another school year comes to a close, we can’t but help thinking about how different school was back in the “old days.”

Here we have a photograph of a first grade class from way back in 1941.

This particular class was from what was originally built as a high school building, but later used as an elementary school. After the Major Howard W. Beal High School was built, this building became known to all as the Center School.

As can be seen, most of the children in the photograph are identified. Although they are now in their eighties, at least two of the students, David Richardson (who contributed this photograph) and Gerald Shelby, and maybe some others, are still “with us.”

The Center School itself stood where the library parking lot is today.

Fun on a fire truck in Shrewsbury