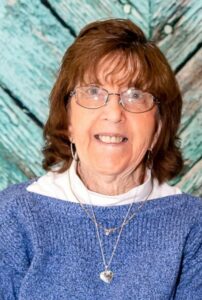 Northborough – Elaine K. (Hammarsten) Marley “Muffy” (72) of Northborough MA died peacefully on May 22, 2022, with her family by her side.

She is survived by her longtime partner of 33 years Robert G. Smith also of Northborough, Daughter Barbara (Dan) Fleming, Son Christopher Niziolek, Son Craig (Beth) Marley, and Son Tom Marley as well as her Brother Dennis Hammarsten. Elaine is predeceased by her parents Arthur and Betty Hammarsten and her daughter Lori Marley. Elaine had 8 grandchildren and 7 great-grandchildren and 2 nieces.

Elaine was born in Worcester, MA and raised in Grafton. She graduated from Grafton High in 1969. She worked many years in retail and retired after 19 years at TJ Maxx. She was diagnosed with Multiple Sclerosis 28 years ago and courageously battled this disease until the very end! Her greatest achievements were winning the 1979 Bingo National Championship but more importantly being a mother, grandmother and great-grandmother. She enjoyed playing bingo and hoped to win the lottery someday. She was a huge Boston sports fan and enjoyed watching the games on tv with her family. She was the most kind, sweetest person who had many friends and will be sorely missed by all who knew her.

The wake will be held on Tuesday, May 31 from 5-8 at the Tighe Hamilton Regional Funeral Home, 50 Central Street, Hudson, MA 01749. A funeral mass will be held at Saint Rose of Lima Church, 244 West Main Street, Northborough, MA on Wednesday, June 1 at 11:00 a.m. A burial will follow at the Northborough Cemetery on Howard St. in Northborough, MA. In lieu of flowers, please make a donation to the National MS society, Worcester chapter.