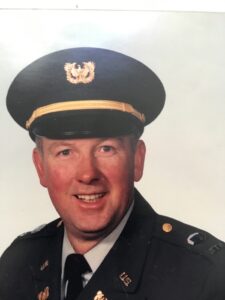 Hudson – Robert “Robbie” Charles Haynes, 80, of Hudson, MA & Mount Vernon, NH, passed away peacefully, on Monday, May 23, 2022 at Rose Monahan Hospice in Worcester, MA, with his loving family by his side, after a period of declining health.

Robert was born in Marlborough, MA, on May 4, 1942, one of four children of the late Kenneth R. and Norma W. (Fox) Haynes. He was raised in Hudson, MA, where he attended school and graduated from Hudson High School. After high school, Robert enlisted in the United States Army, honorably serving as a Combat Engineer during Vietnam from February 10, 1964 until January 26, 1967. After his return from active duty, Robert began a long career as a Letter Carrier in Marlborough for the United States Postal Service, retiring after many years of service. Robert was also a licensed auctioneer and owned and operated Haynes Auction Exchange in Mount Vernon, NH.

Robert is survived by his 3 siblings, Kenneth R. Haynes, Jr. and his wife Geraldine of Salem, N.H, William B. Haynes and his wife Marilyn of Barre, MA and Haillie H. French of Hudson, MA; 5 nephews and 3 nieces.

Relatives and friends are invited to a period of visitation from 5-6pm on Wednesday, June 1, 2022 at Tighe Hamilton Regional Funeral Home, 50 Central St., Hudson, MA; immediately followed by a celebration of his life at 6pm in the Funeral Home. After the Celebration of His Life refreshments will be served at the First United Methodist Church of Hudson, 34 Felton St. Hudson.