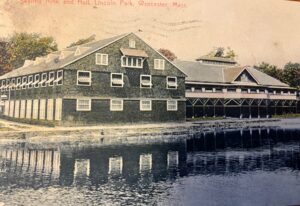 SHREWSBURY – Although Lake Quinsigamond is still a popular summer destination, it was a much different place years ago.

In addition to the White City and Lincoln Park amusement parks, there were many clubs and dance halls along the lake’s shores.

The dance hall at Lincoln Park was a popular spot for years, well in to the 1940s. Even during the tumultuous years of World War II, couples found time for dancing.

Many of them met their future spouses at these dances. One such love story involved this writer’s Aunt and Uncle, Josephine (Perna) and her husband Warren Kalagher.

They met while Warren was still in the service. They met at the Lincoln Park Dance Hall and later married, had three children, and spent many happy years until Josephine’s death in the 1980s.

Although Lincoln Park and the dance hall closed in the 1950s, many local older residents still have fond memories of the place.