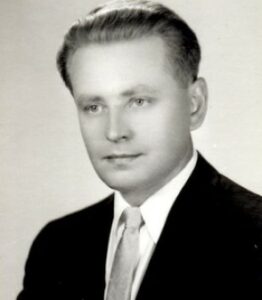 Northborough – Arnolds A. Veinbachs, aged 97 years, of Northborough, Massachusetts, passed away peacefully on the morning of Thursday, June 9, 2022. He was born to Krists and Anna (Bardanovsky) Veinbachs on November 3, 1924, in Skrunda, Latvia and grew up in a Latvian farming community.

Arnolds attended a technical school in Jelgava, Latvia. His schooling was interrupted by World War II. He subsequently served for the Latvian Legion in 1943.

Arnold studied at the Baltic University where he made many of his lifelong friendships and played volleyball with his fraternity brothers. He immigrated to the USA and studied at New York University where he earned a degree in chemical engineering in 1961. He continued his studies there and in 1966 received his Master’s degree. Arnolds worked for American Cyanamid and Dow Chemicals.

In 1957 Arnolds married Zigrida Plumanis, who was a sister of his fraternity brother. The couple lived in Basking Ridge, New Jersey for 34 years. In 2008 Zigrida passed away. Arnolds lived independently at his home in Uncasville, Connecticut until he was 96. He also enjoyed reading his German newspaper, watching sports on TV and keeping track of the weather. He was known for his dry sense of humor, his love for Latvia and chocolate. He was always generous to his church and jovial to the people around him.

Surviving Arnolds are his son, Ditmars Veinbachs and his wife Grace of Bolton, MA, as well as his grandchildren, Alessandra Sydney and Ethan Karlis. Arnolds will be laid to rest beside his beloved Zigrida in the Putnam Cemetery of Greenwich, Connecticut.

Arnolds’ family would like to extend a special thank you to the people of Whitney Place and Beaumont Skilled Nursing Center for their care and support during his final days.

The Veinbachs family has been assisted during this time by Hays Funeral Home, 56 Main Street, Northborough.