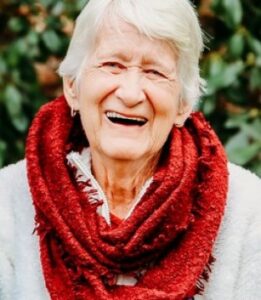 Ora was born on April 10, 1944 in Worcester, Massachusetts. She graduated from Sutton High School and was married to the love of her life, Helge W. Magnusson Jr. on April 27, 1963. In their 59 years together, they raised four children: Kim, Jay, Jason and Jake.

Ora loved to read and enjoyed travelling and working in her garden. She was always up for any adventure ~ whether it was travelling, living on a houseboat, or accompanying her husband on boat racing trips, she was always willing and happy to be wherever he was. For Ora, wherever her family was, this was her happy place. Ora was known for her beautiful smile, feisty spirit, and kind soul.

Ora is survived by her husband, Helge W. Magnusson Jr. Her children, Kim (Magnusson) Dadah and Anthony Dadah, Jay Magnusson, Jason and Sharon (McAvey) Magnusson, and Jake and Jessica (Hylan) Magnusson. Her beloved grandchildren, Shaina Dadah, Tony Dadah, Melanie Dadah, Ryan Dadah, and Noah Magnusson. In addition, her brother, Leslie Vokes and his wife, Carol; her sister, Marilyn (Vokes) Bell and her husband Robert, and her sister-in-law Jayne (Jordan) Vokes, as well as her sisters-in-law Alma Erickson and Theresa Gallagher and her brother-in-law Walter Magnusson and his fiancé, Pamela White, and her cousin, George Clinton Rand. Ora also had the good fortune to know and love her 20 nieces and nephews, as well as her grandnieces and nephews, including her godson, Tyler Vokes who was so close to her heart.

Ora was predeceased by her parents, Thomas and Ora (Harlow) Vokes, her brothers Thomas and Stephen.

Ora’s family would like to thank Notre Dame Hospice for the wonderful care that they offered, with particular thanks to Mishka, Linda, Mike and Kate. Your compassion and support during this time will never be forgotten.

Calling hours will be held on Wednesday, June 15, 2022, at Roney Funeral Home in North Grafton on from 10:00 a.m. – 11:30 a.m., followed at noon, with a mass at St. Mary’s Church in North Grafton. Burial will follow mass service at Pine Grove Cemetery in North Grafton.

In lieu of flowers, the family requests that donations be made to CureSMA, an organization dedicated to finding a cure for Spinal Muscular Atrophy.