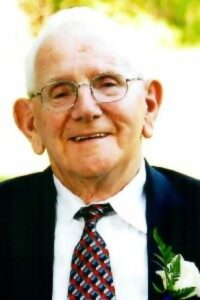 Leicester/Cherry Valley – George David Dandurand passed away on Saturday, June 11th at the age of 96 surrounded by his loving family. He joins his beloved wife of 70 years, Estelle (Raymond) Dandurand (2019).

George was born on July 13, 1925 to Nelson and Angeline (Aucoin) Dandurand in Shrewsbury MA where he grew up as the youngest of 5 children. He started work at an early age on a farm and then as a bowling alley “pin boy”. George attended high school at Worcester Boys Trade studying mechanics and gear making. Like many other high schoolers at that time, he traded a diploma for enlistment papers, enlisting in the US Navy at the age of 17.

George served in the Navy during World War II and the Korean War. He was a Machinist’s Mate 1st class and was then chosen to be part of an elite group of divers, becoming a Deep-Sea Salvage Diver. During WWII he took part as a diver in the D-Day invasion at the Beach Head in Normandy moving on to the Battle of the Bulge then later completing tactical missions in Japan. During the Korean War he was assigned to the USS Cadmus.

After returning home George began his over 40-year career at Bancroft Motors, pumping gas and then working his way up to Service Director until retiring in 1990. It was at Bancroft Motors where he met Estelle Raymond whom he married on Feb 19, 1949. The couple would eventually move to Cherry Valley where they raised 7 children. Family was the most important thing to them as well as their greatest joy and accomplishment. They were so proud of their children, 13 grandchildren and 3 great grandchildren. Their home was the place for family gatherings of cookouts, pool parties and celebrations with family and friends.

George spent his free time gardening, growing enough vegetables to feed the neighborhood. George and Estelle would make and freeze their special tomato sauce as well as a variety of vegetables. George was always working around his home and helping his kids with their home projects. He even earned the nick name “MacGyver” because he could always figure out the tough or impossible situations.

George Dandurand was a loving husband, dad, pépère, and grand pépère. He was a loyal friend, fair boss and a brave veteran who was loved and will be missed. He was a hero to all.

A Funeral Service will be held Thursday, June 16 at 12 noon in the MORIN FUNERAL HOME, 1131 Main St., Leicester. Burial with military honors will follow in Worcester County Memorial Park, Paxton. Calling hours are Wednesday from 5-8 P.M. in the funeral home.

In lieu of flowers, donations may be made to Quilts of Valor Foundation https://www.qovf.org/donate/ or by mail: Quilts of Valor at Charlton Sewing Center (Group 15307) Charlton, MA 01507 or the Dana Farber Cancer Institute 450 Brookline Avenue, Boston, MA 02215 https://www.dana-farber.org/how-you-can-help/ways-to-give/make-a-memorial-or-tribute-gift/.