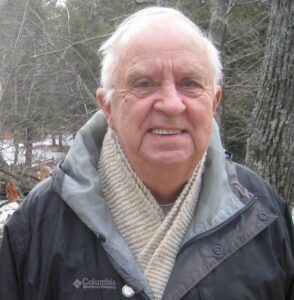 In his final days, he was surrounded by loving family who reminisced about his lasting impact and legacy.  Pops was raised in the suburbs of Chicago and began a sports love affair with the Cubs, Jackie Robinson, The Bears and Fighting Illini. He met and married his sweetheart, Phyllis Ehlert of Riverdale, Illinois on June 20, 1953. Bill and Phyllis were married for 68 incredible years and set a gold standard for relationships for their six children.

Pops was a true renaissance man:  selling World Book Encyclopedia door-to-door, guidance counseling, substitute teaching, stock brokering, and Motel 6 Administering (along with Phyllis).  Bill became “Pops” when all the grandchildren came along. He was a constant champion of all his children and grandchildren, attending many of their youth games. Pops freely gave out encouragement and coaching advice to his grandkids and their coaches.

His legacy was his passion, compassion, and unrelenting positivity for all he encountered.  Pops had a plan for everyone to be their best self.  A pen and paper were a necessity when he had a plan of success for you.  Pops loved being the center of attention, but his passion was helping others, from all walks of life.

He leaves behind his cherished bride of 68 years, Phyllis; her brother, Fred “Chip” Ehlert of Chicago; his six children:  Jay and his wife Elissa, Jill, and her husband Don; Scott and his wife Kate; Tracy and her husband Jim; Paul and his wife Danielle; and his daughter, Katie.  Grandchildren: Chris, Lexi, Pavel, Becky, Shannon, Lindsey, Corey, Stefan, Will (who he joins in Heaven), Nell, Eileen, and Colleen. Great Grandchildren: Isabella, Lucas, Rosalyn, Marley, Damian and Natalie.

In lieu of flowers or donations, the family requests that you pay forward your “inner Pops” and champion someone you love.

There are no services scheduled at this time.