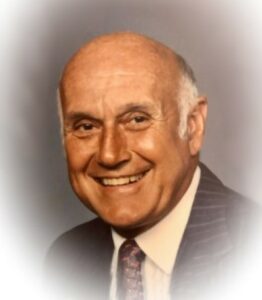 Shrewsbury – Raymond G. “Ray” Harlow, 94, lifelong Shrewsbury resident, passed away peacefully on Monday, June 13, 2022 at his home of 94 years as he wished.

Ray was born, raised, and educated in Shrewsbury, graduating from Shrewsbury High School, Class of 1945, as Class President. He was also a member of the Shrewsbury Crew Team that won several national high school championships and a spot in the Olympic Trials. Ray enlisted in the U.S. Army during World War II and served his country proudly until the end of the war in 1946. He attended UMASS Fort Devens after his honorable discharge and transferred to the University of Vermont, graduating in 1951 with his Bachelor’s degree. He then began his lengthy career in insurance sales and investments, working for Paul Revere Insurance Company in Worcester for over 40 years. Ray won many company awards for his success in sales, and retired after his extensive career.

He was an avid skier, hiker, and outdoorsman – his love of skiing led him to join the University of Vermont Ski Team, where he won the annual Stowe Derby in 1951 and placed in the Top Ten in the NCAA National Cross Country Ski Championships. Ray continued skiing until the age of 85 when he decided he did not want his last run down in a Ski Patrol toboggan and hung up his skis. He was a frequent hiker of the White Mountains in New Hampshire, having successfully climbed all the 4000-foot peaks in that state, many of them multiple times. Ray was also able to pass on his love of the outdoors, skiing, and hiking to his family, friends, and many neighborhood children.

In lieu of flowers, memorial donations may be made to the Appalachian Mountain Club (https://www.outdoors.org/) or to the First Congregational Church of Shrewsbury (https://fccsm.org/), where Ray was an active member. His family would like thank Jewish Healthcare Home Hospice for their care and kindness, especially Hillary. They would also like to thank Prinscilla for the excellent care provided.

Relatives and friends are invited to gather for Ray’s funeral service, which will be held at 11:00 AM on Saturday, June 25, 2022 at First Congregational Church of Shrewsbury, 19 Church Road. Burial, with military honors, will be held privately. The Britton-Shrewsbury Funeral Home is honored to be assisting with arrangements.