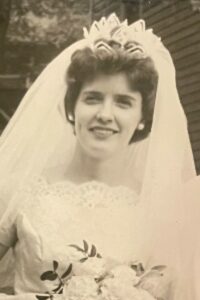 Mrs. Adams was married for 58 years to the late Kenneth E. Adams Sr. who died in 2021. She is survived by two sons, Kenneth E. Adams Jr. of Auburn and Todd E. Adams of Shrewsbury and two grandchildren, Samantha and Rori Adams. Veronica was born in Cambridge, MA daughter of the late Louis and Rena (Beauregard) Shaw.

Veronica graduated from Shrewsbury High School and then continued her education by earning a bachelor’s degree in education from Worcester State College. Mrs. Adams worked as a pre-school teacher for many years at the Perkins School where she specialized in teaching children that were deaf. When Veronica finished teaching she spent many years working as a retail clerk for various department stores in the Worcester area.

Ms. Adams was an avid basketball and baseball fan to say the least, unlike many other people she was a fan of the game and not any one particular team. She would love to watch either sport regardless of the level that was being played or what team was playing. Veronica enjoyed being with her family and cherished the time at Crystal Springs Campground that they spent together.

Funeral services are being held privately. Memorial contributions in memory of Veronica may be made to Saint Jude’s Children Research Hospital 501 St. Jude Place Memphis, TN 38105.