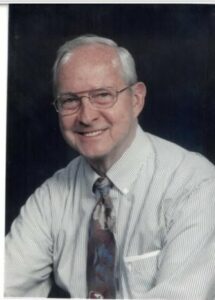 After graduating high school, Frank went on to proudly serve his country in the United States Army as a paratrooper during the Korean War. Before leaving for his year-long deployment in Germany, he married his lifelong sweetheart, Lorraine Blanchette in 1952. Upon his return, they settled down in Marlboro, Massachusetts for 23 years and raised a family.

Frank was gainfully employed at Raytheon Company for nearly 20 years before moving to Lake Helen, FL. In Lake Helen he served as the “nuts and bolts of the city’s government” as City Clerk for 17 years. During his tenure he earned several awards for his distinguished leadership.

After his retirement in 1996, Frank and Lorraine traveled extensively with trips to Italy, Hawaii and across our beautiful country including many stops at our National Parks. Frank was a Golfer in his younger years, he was also an avid fan of Crossword puzzles, the Crypto Quote, and the Jumble Puzzle in the daily paper.

He loved cars. Especially buying them! Seemed like he had a different car every other year. He once made a list of over 50 cars that had passed through his hands in his lifetime! Motorcycles were another favorite pastime for him. Many fond memories were created with Lorraine riding along with him on the back of the bike.

His most recent favorite pastime was to feed the squirrels, chipmunks, & birds while just enjoying nature.

Frank’s most profound character trait would have to be his sense of humor and friendliness. He never met a stranger and was always willing to tell a joke or a story to anyone who would listen. To attest to this fact, you should know that he requested the song, “Oh Lord It’s Hard to be Humble”, (by Mac Davis) be played at his funeral service! A dear colleague of Frank’s summed him up best, “He had a great sense of humor surrounded by a streak of mischief!”

Frank was proud to be a veteran and had a strong sense of honor for his country.

A private graveside service will be held at the Massachusetts Veterans Memorial Cemetery, Agawam, MA at the convenience of the family.

In lieu of flowers, donations may be made in Frank’s memory, to Premier Circle Smile Train, PO Box 96246, Washington DC 20090-6246, or by visiting www.smiletrain.org.