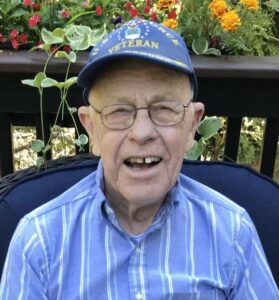 Marlborough – Harold “Harry” F. Wolfe, 86 of Marlborough, died at his home on Friday, July 1, 2022 surrounded by his loving family. Harry was born in Clarion, PA, the son of the late Harold T. and Mildred (Leider) Wolfe

He graduated from Salem OH High School and proudly served in the United States Air Force.  The discipline and patriotism he learned in the Air Force never left him, as friends and family will attest.

Harry was employed at Honeywell and Bull Information as an electronics manufacturing supervisor where he retired in 1992 after over 30 successful years.  His dedicated work ethic to support his family included many home projects that expanded his mechanical tinkering capabilities that he learned from his father and his military service.

Harry and his wife Ann spent many years vacationing with family in OH and traveling to Maine and Cape Cod, especially enjoying trips to Amish country and the scenic countryside.

He was predeceased by his son Richard Wolfe in 2021, 3 sisters, Ethel Yingling, Jean Weckerly and Pat Morris and a brother Frank Wolfe.

In lieu of flowers, memorial donations may be made in Harry’s name to St Jude’s (https://www.stjude.org).