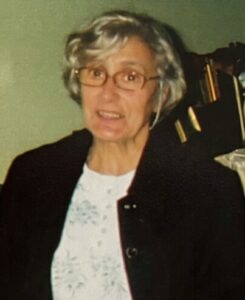 Hudson – Maria Lourdes Monteiro, 83, of Hudson, MA, passed away peacefully, on Saturday, July 2, 2022, at Saint Patrick’s Manor in Framingham, MA, after a period of declining health.

Maria was born in Santa Maria, Azores, Portugal, on November 23, 1938, a daughter of the late Francisco and Maria A. (Braga) Monteiro. She was raised and attended school in Santa Maria and later immigrated to Hudson in 1955 at the age of 16, where she started work at a local shoe manufacturing company. In 1972 she moved to Somerville to join the Little Sisters of the Poor as a novitiate, beginning her journey to become a Catholic Nun.  A year later she went to Queens, New York where in 1975, she took her first vows as a Catholic Nun.  From there she continued her mission in France with the Little Sisters of the Poor living an active vocation of prayer and charitable works. Maria had a natural gift with languages and became proficient in Portuguese, English and French. She was a long-time member of Saint Michael’s Parish in Hudson. Maria enjoyed spending time with her family and loved walking. Her entire life she dedicated herself to helping children, the sick and the poor with prayer and charitable donations and contributions.

Maria is survived by her sisters-in-law, Maria I. (Carvalho) Monteiro and Maria I. (Meneses) Monteiro, both of Hudson and nieces Linda Monteiro-Hopper (Godchild) of Westport, CT, Diane Schiavo of Marlborough, Deborah Lemon of Hudson and nephews Mark and Paul Monteiro, both of Hudson, and Leo Monteiro of Plymouth along with their spouses and a great many nieces and nephews. In addition to her parents, she was also predeceased by 3 brothers, Jose Monteiro, Antonio Monteiro and Joao Monteiro.

A period of visitation will be held from 3-6 pm, on Sunday, July 10, 2022 at TIGHE HAMILTON REGIONAL FUNERAL HOME, 50 Central St., Hudson, MA. A Mass of Christian Burial will be celebrated at 9 am on Monday, July 11, 2022 at Saint Michael Parish, 21 Manning St. Hudson, MA; followed by Committal Services in Saint Michael Cemetery in Hudson.