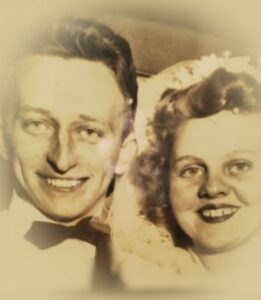 Wilbraham – Mary Ann (Stepenovitch) Romans, 96, formerly of Shrewsbury died peacefully July 15, 2022 at Baystate Wing Hospital in Palmer. She had lived in Shrewsbury for over 57 years before moving to Wilbraham.

Mary’s beloved husband of 70 years, Victor J. Romans, died in 2018. She leaves two grandchildren, Andrew N. Belitsos and his wife Leah, of Eden, Vermont, and Demetra A. Atkins and her husband Jonathan, of Monson, MA; three great-grandchildren, Alexander and Maximus Belitsos, and Liam Atkins. Besides her parents, she was predeceased by her daughter, Ruth A. Romans-Belitsos; two brothers, John and Joseph Stepenovitch and two sisters, Nellie Lange and Anna Stepenovitch.

Mary was born and raised in Worcester, daughter of the late Frank and Anna (Struckrus) Stepenovitch. She graduated from the former Commerce High School in 1945 and later attended Quinsigamond Community College.

Mary had been employed by Wyman Gordon Company for 29 years. After retirement, she enjoyed traveling with her husband. On the occasion of their 55th wedding anniversary, they celebrated by going on a Hot Air Balloon ride.

She has been a member of the Y.M.C.A. Greendale branch for 19 years during her senior years.

Mary was a great mother, a wonderful Grandmother and an amazing Great-grandmother. We will forever hold her in our hearts as the Grandmother with the pink lipstick, always hiding candy and keeping a consistent stash of change hidden in Grandpa’s chair for the kids to find. She always loved to be on Cape Cod with her favorite “guy” and then with all of the family that would follow. We will take with us her secrets for longevity: “You have to keep moving and enjoy the day.”

Relatives and friends are invited to a prayer service on Monday July 25, 2022 at 9:45 AM at the BRITTON-SHREWSBURY FUNERAL HOME, 648 Main Street, Shrewsbury. Burial will be held privately with her husband Victor, in the Massachusetts National Cemetery in Bourne, MA.