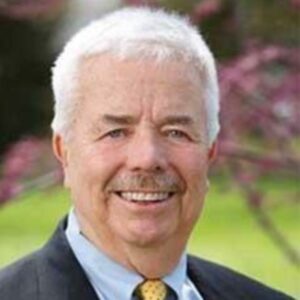 Mike was born in Bridgeport, Connecticut, and grew up in Shrewsbury, Massachusetts. In his youth, Mike was an avid outdoorsman and Eagle Scout. His continued dedication to scouting inspired all three of his grandsons to follow in his footsteps to achieve the rank of Eagle scout in honor of their grandfather.

After high school, Mike attended the United States Coast Guard Academy, graduating in 1963 with a Bachelor of Science degree in engineering and a commission as an officer in the Coast Guard.

During his 24 years of service in the Coast Guard, he served on the Coast Guard ships the Eastwind and the Eagle and has sailed throughout the Antarctic, the Panama Canal, Europe, and the Atlantic.

Mike attended law school at the National Law Center of the George Washington University in Washington, D.C., graduating with honors with a juris doctor degree in February 1971. Following law school, Mike was assigned to various legal assignments on the east and west coasts, including a four-year assignment as the legal officer for the Coast Guard in Hawaii. He was instrumental in helping to draft the federal law of the sea and has traveled to virtually every island in the Pacific on which the United States had a presence to act as attorney and/or judge in our military courts.

Mike retired from the Coast Guard with the rank of Commander in 1983, and moved with his family to Easton, Maryland where he entered private practice as a civil litigator, later forming a partnership with his daughter with whom he practiced law for 26 years.

Mike dedicated his life to family, service and the community. Amongst other awards, he received the Thurgood Marshall Legacy Award from the Talbot County branch of the NAACP and the lifelong service award from the Easton Rotary Club.

He is survived by his beloved wife of 56 years, Maureen A. Jacobs, his daughter, Melanie Barney and her husband Bruce Barney, his son, Jason Jacobs, his grandchildren whom he adored, Jack Barney, Deanna Jacobs, Griffin Barney and Nicholas Jacobs, and his beloved niece and goddaughter Cordelia Nemeyer.

Mike was predeceased by his parents, Joseph and Edith Jacobs and his two brothers, Paul and Richard Jacobs.

In lieu of flowers, charitable contributions in his memory can be made to the Melanoma Research Foundation (MRF) (https://melanoma.org/) or to the Society of St. Vincent de Paul (https://svdpeastonmd.org/giving#onlinedonation).