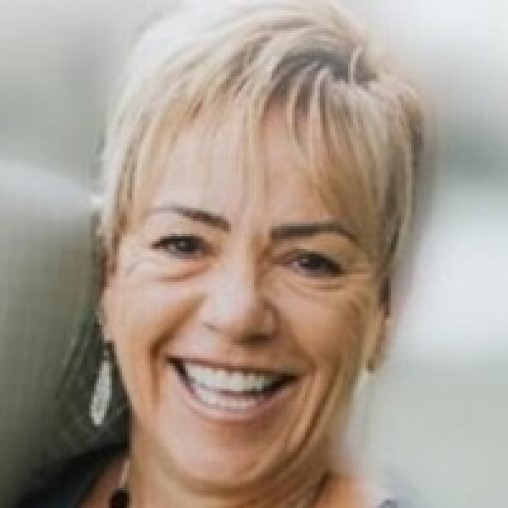 Shrewsbury – Andreana Marie Grimaldo passed away on August 6, 2022 in the comfort of her home surrounded by her adoring family after a courageous battle with glioblastoma.

Andreana was born in Hanover, NH to Daniel Dempsey Jr. and Elizabeth “Poppy” (Paquet) Dempsey, both predeceased.  She attended Belmont High School (Class of 1981) where she played softball, volleyball, loved spending time on Lake Winnipesaukee, and at her grandparent’s farm in Lancaster, NH.

Her lifetime love of math started during her summer job working at the dog track in Laconia, NH as the Racing Secretary where she helped crunch numbers and understand the statistics of the races. After graduating high school, Andreana moved to Central Massachusetts where she attended Becker College for her associate’s degree and Worcester State University for her bachelor’s degree in applied mathematics and her master’s degree of science in applied mathematics.

While in college, she met her husband, Raymond Grimaldo Jr., who she has been married to for 37 beautiful years. While earning her bachelor’s and master’s degrees, Andreana was raising her three daughters, Amy, Alicia, and Allison, working full-time and attending school on nights and weekends. She will forever be remembered as a model female leader: hard working, intelligent, confident, and family-oriented.

She started her career at Quinsigamond Community College (Worcester, MA) as an adjunct professor in 1993, while still attending graduate school. Her background made her the perfect professor as it allowed to be the ultimate champion of her students-one of the many hats she wore and one that was most near and dear to her heart.

Before retiring after 25 years at the college in January 2021, she was the coordinator of the math department where she supported over 60 full-time and part-time faculty. One of her proudest accomplishments at the school was starting the Women in STEM group. In addition, Andreana co-authored 13 instructor resource manuals with her friend and colleague, Denise Robichaud, before writing a set of textbooks for developmental mathematics for Pearson Education.

Andreana was the epitome of a family matriarch-strong, a confidant, always present, uplifting, committed, and perfected the balance of being a mother and a best friend. She enjoyed spending time with her friends in her book club, her golf league, and going to the beach whether it be Cape Cod or her second home in Tarpon Springs, FL.

She was always dressed to impress, driving around town in her red convertible visiting her friends and family. She loved music and went to many concerts with her husband and daughters. Her husband and she were always on the go and could frequently be seen out supporting Boston sports teams and making spontaneous day trips around New England. The image of Andreana that her family will always have in their hearts is her surrounded by her family, wearing the latest fashion, a glass of white zinfandel in her hand, and a huge smile on her face.

The family would like to extend their most sincere thanks and gratitude to her world-class medical care teams: Dr. David Reardon at Dana Faber, Dr. Rose Du at Brigham & Womens, the team at Beacon Hospice, and Jessica Mantha and Ami Crawford who cared for mom like she was their own.

In lieu of flowers, tribute gifts can be made in Andreana’s memory to Quinsigamond Community College at www.qcc.edu/give. This will allow the family to continue Andreana’s work of supporting students in the Worcester community in furthering their education in mathematics.