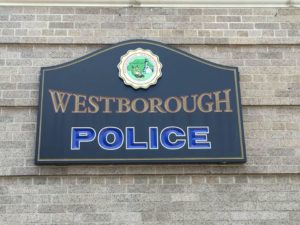 WESTBOROUGH – A Shrewsbury man faces charges after he allegedly cut another man with a machete during an altercation at the former Regal Cinemas.

On Sept. 13 at about 6:30 p.m., Westborough police responded to a report an altercation at the former Regal Cinemas at 233 Turnpike Road involving two men.

In a press release, police said the first officer reported that one of the men involved fled the scene. Witnesses told police that the man drove his vehicle toward the victim “in an attempt to run him over.”

The man allegedly exited his vehicle, wielding a machete that he used to cut the victim during the altercation. The victim was transported to a hospital and treated for injuries to his hand.

After a description of the suspect and his vehicle were provided to police departments in the area, Shrewsbury police pulled over the man.

Westborough police were able to identify the Shrewsbury man.

He was arraigned in Westborough District Court and he was held on a $10,000 bail.