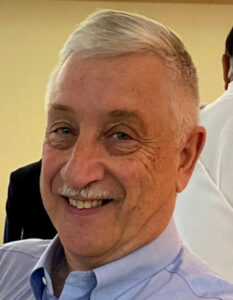 Westborough – Philip Francis Bayrouty, Jr., 68, of Westborough, MA, peacefully passed away on Tuesday, October 25, 2022, alongside his children at the Brockton VA Medical Center in Brockton, MA after battling ALS.

He is survived by his daughter, Kara Daly (Bayrouty) of Derry, NH, his son, Daniel Bayrouty of Bedford, NH, his 4 grandchildren, Kyle, Claire, Korey and Jack, his son-in-law, Keith Daly, daughter-in-law, Ellen Bayrouty, his sister, Norma Jean Bennett of Saco, ME, his sister-in-law, Mary Bayrouty of Rutland, MA, his aunt, Pauline Kinsell, of Shrewsbury, MA and several nieces and nephews. He was proceeded by his mother, Elaine Bennett, his father Philip Bayrouty Sr., his stepfather, Norman Bennett, and his brother Douglas Bayrouty.

Phil spent much of his formative years playing numerous sports in his community. He graduated from Westborough high school in 1972. A few years later Phil entered the U.S. Air Force. He began his career as a dog handler in Korea working as a security police officer where he developed a deep bond with his German Shepard, Frasier. Upon returning to the States, he then became a computer operator. In 1989 he found his true calling, becoming a recruiter for the Air Force. It was in this position that he thrived, being highly recognized for seeking out the best and brightest young minds and guiding them to successful military careers. He served his country proudly in the Air Force for twenty years and retired as a Master Sergeant in 1995. He spent nearly 20 years working for Knights Airport Limousine Services where he enjoyed meeting and conversing with new members of the community daily. He especially loved picking up families on their way to Disney World and gracing them with his vast knowledge of the parks. After spending time with his family, Phil was a fierce lover of all Boston sports, movies, and all things Disney. He will be missed by all.

Calling hours will be held from 4 to 7 PM, on Wednesday, November 2, in the Pickering & Son Westborough Funeral Home, 62 West Main St., Westborough.

His funeral Mass will be held at 10:30 AM on Thursday, November 3, in St. Luke the Evangelist Church, 70 West Main St., Westborough. Military Honors will follow the Mass outside of the church.

Burial in the Veterans Grove Memorial Section of Pine Grove Cemetery, Westborough, will take place at a later date.

In lieu of flowers, donations to the ALS Association would be greatly appreciated.