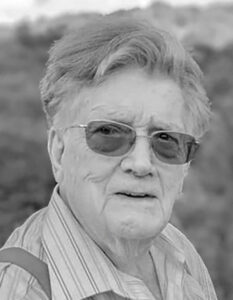 Born in Mount Morris, PA on February 20, 1931, Brian was a son of the late W. Albert and Letha Dale (Barney) Barnhart.

Brian graduated in 1949 from Trinity High School in Washington, PA, where he was a member of the undefeated, Western Pennsylvania Interscholastic Athletic League champion 1948 varsity football team. He attended Washington & Jefferson College prior to his enlistment in the US Navy. A Korean War veteran, Brian served as an avionic electrician on the USS Wasp, which, while conducting night flying operations on 26 April 1952, famously collided with destroyer minesweeper USS Hobson when the Hobson attempted to turn in front of the carrier. Hobson broke in two and quickly sunk, causing the greatest loss of life on a US Navy ship since World War II.

While stationed at Quonset Point in Rhode Island, Brian met the love of his life, Carol May Holbrook, at a USO dance and they married on October 30, 1953.

Brian was capable of building or repairing just about anything, despite the challenge of diagnosing malfunctions in vehicles that would not operate for his children but would invariably start right up for him. He especially loved woodworking and woodcarving, was a talented artist, maintained a lawn and gardens that inspired others, loved banana cream pie—especially when made using his mother’s pie crust recipe, and absolutely loathed mashed potatoes.

Services will be private. In lieu of flowers, please consider a donation to the National Multiple Sclerosis Society.

Funeral arrangements are under the care and direction of the Pickering & Son Westborough Funeral Home.