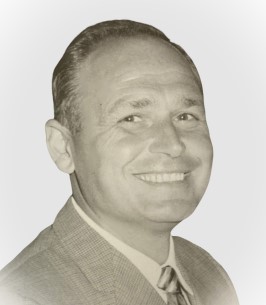 Shrewsbury – Alphonse P. “Al” San Clemente, 97, longtime Shrewsbury resident, formerly of Milford, passed away peacefully on Wednesday, December 7, 2022 in the comfort of his home, with his family by his side.

Al was born, raised, and educated in Milford, where he discovered his love for hockey, playing on ponds during the winter months. After graduating, he played semi-pro football for the Milford Trojans, prior to enlisting in the Army Air Corps during World War II. He was stationed in Europe for three years, and was honorably discharged in May of 1946, as a Corporal. After the war, Al attended and graduated from Nichols College, studying electronics. From there, he was accepted into Northeastern University School of Law in Boston, where he graduated second in his class and received his law degree.

Al opened his first law firm in Leominster, later working at Fusaro & Fusaro in Worcester. In 1972, he opened a practice in Worcester: San Clemente, Italiano & Conlin – he also had an office in Fitchburg, where he was the attorney for Worker’s Credit Union. His main focus and interest in his law career was being a Civil Trial Lawyer.

In his free time, Al loved collecting and restoring classic cars, especially models from 1929 to 1950. Hockey always remained a prominent element in Al’s life, too, even in his more recent years. He joined a team of seniors, who called themselves the Central Mass. Rusty Blades – and he was oldest of the group. Al continued to enjoy the game until his 89th year, when he retired his skates.

Flowers are welcome, along with memorial donations which can be made to Fisher House of Boston (https://www.paypal.com/donate/?hosted_button_id=SSYJK5LLEG5EL) or to Our Lady of Mt. Carmel and Loreto, 33 Massasoit Road, Worcester, MA 01604.

Relatives and friends are invited to visit with the San Clemente family between 4 and 7 PM on Monday, December 12, 2022 at the BRITTON-SHREWSBURY FUNERAL HOME, 648 Main Street, Shrewsbury. His funeral Mass will be celebrated at 10 AM on Tuesday, December 13, 2022 at Our Lady of Mt. Carmel and Loreto, 37 Massasoit Road, Worcester. Burial with military honors will follow at Mountain View Cemetery, Shrewsbury.