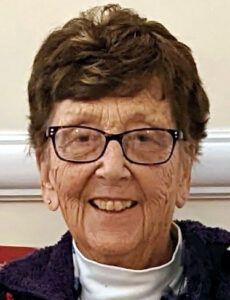 She is survived by two children, Gretchen Slevin and her husband Mike of Worcester; and Glenn Anderson of Auburn; and her precious grandson, Liam M. Slevin of Worcester, who was a wonderful blessing in her life.

She was born in Plainville, New Jersey, daughter of the late William Warren and Margaret (Consalvo) MacKenzie, and was raised in New Jersey before moving to Worcester, Grafton, and most recently Leicester. She graduated from Becker College and became licensed in early childhood education.

Mrs. Anderson was the department and budget manager at Tufts Veterinary Hospital for 22 years prior to retirement. She was a member of St. Ann’s Church in North Oxford and was previously a longtime member of St. James Church in South Grafton.

She enjoyed playing the flute and played with the Falmouth Town Band every summer. She loved to try new things including boating, going to the beach, biking, cross country skiing, long walks with Andy and Josie, and traveling to York Beach. She loved Cape Cod and spent summers there for 36 years. She enjoyed many trips on April school vacation with Andy, going to theater, horses and dogs. Most important in her life was spending time with her family and especially her grandson, Liam.

A funeral Mass will be held at 10 a.m. on Saturday, December 17, 2022, at St. James Church, 89 Main St., South Grafton. Burial will follow at St. Philip’s Cemetery, Grafton. There are no calling hours.

In lieu of flowers, memorial contributions may be made to an animal shelter of your choice.

Paradis-Givner Funeral Home in Oxford is directing the arrangements.