UPDATE: Police said the Melewskis have been located.

SHREWSBURY – After a silver alert was issued for a Webster couple, police said Janusz Melewski, 77, and Stanislawa Melewski, 94, have been located.

According to the Webster Police Department, the Melewskis were located in Clinton, Conn.

“I am told they were found roadside and are being transported to the hospital via ambulance to be evaluated as a precaution,” the post said. “Thank you to everyone for sharing our post, and to all of the agencies that assisted us today in our efforts to locate them.”

Webster police sought the public’s help on Dec. 14 to locate the pair, who had been last seen in Shrewsbury.

According to police, the pair had not been seen in their Webster home since Dec. 13 at 11 a.m. At about 6:15 p.m., the Melewskis reportedly stopped in Shrewsbury to ask for directions back home to Webster, but never returned home. 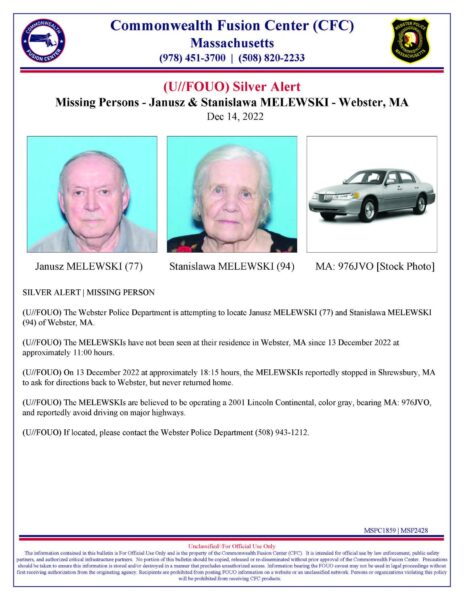