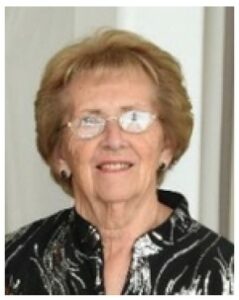 Portrush Run, Estero, FL – Patricia A. (Mackin) Newsham, ‘Pat’, 89, of Portrush Run, Estero, FL, formerly of Narragansett, RI, Shrewsbury, MA, and South Weymouth, MA, died on December 29, 2022, after a brief illness. In her final days, she was surrounded by her caring and heartbroken children. Pat was the devoted wife of the late John, “Jack,” Newsham for nearly 50 years.

Pat was born in Bronx, NY on October 5, 1933. She was 1 of 14 children who grew up in Providence, RI. She had 8 children; 32 grandchildren, and 20 great-grandchildren. She was the daughter of the late John J. and Margaret (Whelpley) Mackin. Pat was the loving mother of Diane (Timothy) Baum of Scarborough, ME; Elizabeth Newsham of Narragansett, RI; AnnMarie (Edmund) Zaborski of East Greenwich, RI; Stephen (Cynthia) Newsham of Fitchburg, MA; Peter (Krystyna) Newsham, of Woodbridge VA; Patricia (Mark) Garufi of Milton, MA; Christine (Thomas) Patricca of Estero, FL; and Paul (Sarah) Newsham of Paxton, MA.

Pat was a parishioner and communicant at Our Lady of Light Catholic Church in Estero, FL and a communicant at St. Mary Star of the Sea in Narragansett, RI. She graduated from David Hale Fanning School of Nursing, earning her LPN. Pat was an avid card player and a huge fan of her beloved New England Patriots, Boston Red Sox, Boston Celtics, and Boston Bruins. She had a sharp wit and a tremendous sense of humor that was recognized and celebrated by all who had the privilege of knowing her. Above all, Pat was truly a matriarch to her behemoth family in that she maintained a special relationship with each and every one of her children, grandchildren, and great-grandchildren, so much so that they often jostled for the position of being Pat’s “favorite.” Her family was her purpose in life, and it will be her greatest legacy.

In lieu of flowers, contributions can be made to Pat’s favorite charity, St. Jude Children’s Research Hospital, Memorial Giving, 501 St. Jude Place, Memphis, TN 38105. Or, donations can be made online at https://www.stjude.org/give/memorials-and-dedications.html.