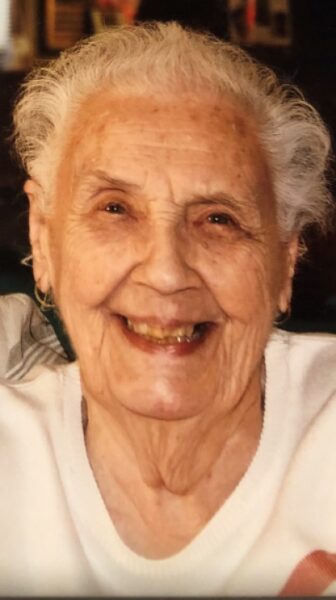 Mary, 103 years old, was born in Marlborough to Frank & Mary (Collins) Flaherty on June 18th, 1919. She was educated in Marlborough schools, and after graduating, decided to enter the work force at the Dennison Manufacturing Co. She later moved on to work for Victory Plastics where she met, fell in love with, and eventually married her husband John F. Hellen Jr. of Hudson. Shortly after their marriage they decided to settle down in Hudson and begin a family of their own. Mary is survived by her son John F. Hellen III. & his wife Kate of Norway, ME. Her Daughter Mary C. Armour & her husband Richard of Hudson, two Grandsons; Jamie Hellen & his wife Desiree of Southborough, Matthew Armour & his wife Ashley, & her Great-Granddaughter Penelope of Marlborough, and many nieces and nephews as well. Mary is also pre-deceased by her husband John as well as her son James P. Hellen & his wife Kathleen (Hellen) Campbell of Hudson.

If there was one thing Mary was most known for it was her LOVE of politics. You were sure to see Mary on every Election Day serving as a Warden at Precinct 3. She was very active in Local Democratic politics and even chaired the Hudson Democratic Town Committee from 2000-2005. Prior to that she served as Treasurer for that Committee from 1976-2000. She was the first woman appointed to Hudson’s Finance Committee which she faithfully served from 1972-1996 and even chaired that position from 1988-1992. Mary eventually settled into her final job at Town Clerks office where she worked alongside some of her very best friends, who loved her dearly for many years.

Mary will certainly be missed by all that knew her. She brought a smile to anyone’s face that had the pleasure of talking to her, and was often revered for her feistiness, no matter her age! In lieu of flowers, please donate to VNA Hospice Care @ 120 Thomas St. Worcester, Ma. 01608.

Relatives and friends are invited to a period of visitation from 4-7pm on Tuesday, January 17, 2023 at Tighe Hamilton Regional Funeral Home, 50 Central St., Hudson, MA. A funeral Mass will be celebrated at 9am on Wednesday, January 18, 2023 at Saint Michael Parish, 21 Manning St., Hudson, MA; procession to St. Michael Cemetery, Hudson, MA will follow for committal services.