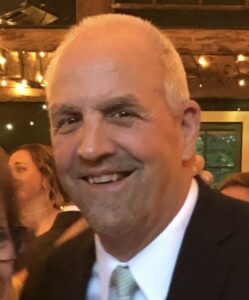 Northborough – Robert Stowe Whitney, 71, of Northborough died peacefully on Wednesday, January 11, 2023, at his home, surrounded by family. He is the son of the late Curtis Stowe and Martha (Partch) Whitney and the husband of Kristen Joan (Ahern) Whitney.

Bob was raised in Marlborough, where he was a decorated athlete in baseball and football. His passion for sports led him to New Mexico to play college baseball, spending his summers as a pitcher for the Bourne Braves in the Cape Cod Baseball League. Returning to his hometown after college, he met the love of his life, Kristen, with whom he shared 45 years of marriage. For Bob, family was his top priority.

Bob was a career salesman for Hills Home Market, where he treated his customers like family for over 40 years. When not working, Bob could be found either cooking a meal for loved ones, tending to his large vegetable garden, or cheering on a Boston sports team. He was a warm, gentle man with a welcoming presence that put everyone around him at ease. People from every facet of his life, including friends, colleagues, and his healthcare team will remember him for his unwavering kindness and respect. He will be greatly missed.

In lieu of flowers, gifts may be made to Dana-Farber Cancer Institute in memory of Robert Whitney to support cancer research and patient care at: