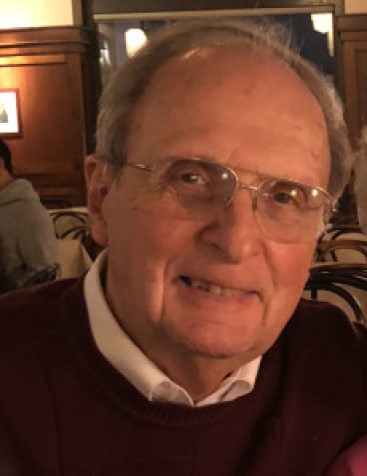 Richard was born in Marlborough, MA, on June 2, 1932, and was the youngest of three children of the late Wilrose and Helen (O’Donnell) Phaneuf. He was raised on Apsley St. in Hudson, MA, where he was a three-sport athlete and alumni of the Hudson High School graduating class of 1951. His senior year baseball team was inducted into the HHS Sports Hall of Fame, and he was very proud of helping his team win the State Championship by starting a rally with a double off the Green Monster at Fenway Park.

After graduating from Hudson High School, he served honorably in the United States Coast Guard from 1952 until 1955 during the Korean War. Richard had a long and successful career as a graphic illustrator for Lapointe Machine and Tool Company in Hudson, and later for Raytheon Company before retiring. He was a former member of Christ the King and Saint Michael Parish in Hudson, and later St Mary’s Church in Shrewsbury.

After retiring from Raytheon, Richard and his wife Patricia relocated to Cape Cod for 12 years, before moving to Shrewsbury to be closer to their family. For the past 2-½ years, they have resided at Golden Pond Assisted Living and Memory Care in Hopkinton, MA.

Richard was an undiscovered artist, and could draw most anything that he could look at.  He was rarely seen without his camera, and he enjoyed taking photos at most every event he attended. He also enjoyed organizing the photos and making photo albums and picture collages for family and friends. His family was his life, and he loved spending time with them at family gatherings and cookouts.

In addition to his beloved wife, Patricia M. (Duley) Phaneuf, he is also survived by his 3 children, Stephen R. Phaneuf and his partner, Linda Muren of Hopkinton, MA, James P. Phaneuf and his wife Susan of Milford, MA, and Susan M. Desimone and her husband James of Shrewsbury, MA; 6 grandchildren; Gina M. Hubcsh and her husband Jason, Brad W. Phaneuf and his wife Trista, Angela R. Phaneuf, Lori E. Gelsomini, Nicole P. Dutton and her husband Stanley, and Officer Alex A. Desimone, 10 great-grandchildren, and a special sister-in-law, Eileen Deviln of Hudson, MA. In addition to his parents, he was also predeceased by his brother, Robert W. Phaneuf; his sister, Natalie E. Gay, his grandson, Jeffrey J. Phaneuf, and his best grand-doggie pal Brody.

Relatives and friends are welcome to gather for a period of visitation from 10am until 12pm on Tuesday, January  31, 2023, immediately followed by a Funeral Service at 12pm at Tighe Hamilton Regional Funeral Home, 50 Central St., Hudson, MA.  A funeral cortege will process to Forest Vale Cemetery for interment and military honors at the completion of services at the funeral home.