How can the Community Advocate help you promote your business?
Print Ads
Web Ads
Digital Marketing 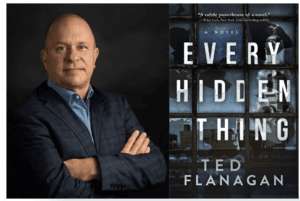 Northborough – On Saturday, Jan. 15, from 2-3 p.m., the Northborough Free Library welcomes Northborough native Ted Flanagan as he returns to his hometown to discuss his debut novel, Every Hidden Thing. The event will take place in the library’s Meeting Room.

In Every Hidden Thing, big city politics, nasty secrets, a dirty cop, and a deranged sociopath set the stage for a riveting journey deep into the urban jungle. The setting for Flanagan’s thriller/mystery novel is Worcester. When night shift paramedic Thomas Archer uncovers a secret that could upend Mayor O’Toole’s career, O’Toole is set on silencing him, and sends Eamon Conroy, a brutal former cop, to ensure the truth remains under wraps.

Ted Flanagan grew up in Northborough. He is a writer and a paramedic, and lives in Central Massachusetts with his wife and three kids. Ted was also a newspaper reporter and served as a Recon Marine with 2nd Recon Battalion. His short fiction has appeared in Shotgun Honey, Akashic’s Mondays Are Murder, and Cognoscenti, among others.  Every Hidden Thing is his first novel.