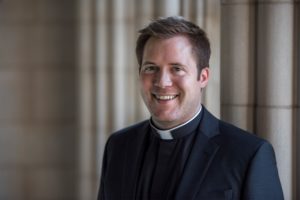 Marlborough – The Rev. Benjamin Straley, widely hailed as one of the finest organists and liturgical musicians of his generation, will present a free pipe organ concert Sunday, Feb. 23, from 3-4 p.m., at the First Church in Marlborough, Congregational. A light reception will follow.

Former organist and associate director of music at the Washington National Cathedral, Straley holds masters’ degrees in both Music and Divinity from Yale University as well as a certificate in Anglican Studies from Berkeley Divinity School. He is also a priest in the Episcopal Church.

Straley was featured in the May 2015 issue of “The Diapason” as one of the “Top 20 under 30” young organists in the country. In addition, he was Organ Scholar at Trinity Church (Episcopal), New Haven, as well as Director of Music for the Episcopal Church at Yale.

He currently serves as Assistant Rector of St. John’s, Essex, Conn., and is the Director for the Anglican Singers, a choral ensemble dedicated to music of the English Cathedral tradition, based in New London, Conn. Straley also serves as sub-dean of the Greater Hartford Chapter of the American Guild of Organists.

The concert is a part of the Marlborough Community Recital Series and sponsored by St. Mary’s Credit Union in conjunction with the First Church 350th Outreach Fund. First Church is located at 37 High St., above Union Common, at the corner of High and Bolton (Route 85) streets in Marlborough.