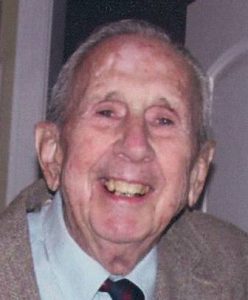 Southborough – Francis Edward “Frank” Moran, 90, was born in West Roxbury to the lateLeslie (Palais) and J. Francis Moran and grew up during the great depression. Having lost his own father at an early age to the tuberculosis epidemic of the 1920s, he found companionship and mentoring in the Boy Scouts of America. He received their highest honor, that of Eagle Scout.

Mr. Moran served our country in World War II in the Battle of Iwo Jima. Upon his return, he received a degree in business from Boston University. His adult life was inspired and informed by the life of President John Kennedy.

He worked most of his life in management and sales within the liquor industry. After his retirement, he sold real estate in the Needham area. His favorite pastime was spending time with his family, completing the Globe's daily crossword puzzle, as well as enjoying a good game of golf.

Always a man with great style, Mr. Moran lived in Needham, Manchester By the Sea, and lastly Southborough with his wife of 56 years, Mary Frances (Penny) Moran.

In addition to his devoted wife, he is survived by four loving children and their families, his daughter Susan Moran and husband Hank Mathieu of Hadley; his son, Sean Moran and wife Ann of Norfolk; his son, Brian Moran and partner Antoinette Fecteau of Franklin; and his daughter, Sheila Coomey and husband Daniel Coomey of Shrewsbury. He is also survived by seven cherished grandchildren, Cameron, Gregory and Olivia Mathieu, Christopher and Kevin Moran, and Erin and Daniel Coomey; his sister-in-law, Ann Moran, and nephew, Christopher Moran, of Sudbury; his brother-in-law, John Penney and wife Mary of Scituate; his sister-in-law, Patricia (Penny) Allen and her husband Don of Needham; and other nieces and nephews. His brother, Robert, predeceased him in 2005.

Mr. Moran possessed the rare personal qualities of tenacity and optimism. His life lessons from childhood resulted in a passionate engagement with all whom he loved. He lived for his wife and children. For that reason he left this earth Sept. 28, 2011 on the wings of angels.

He was buried with military honors in the National Cemetery in Bourne. A private memorial will be held at a later date. The Britton-Shrewsbury Funeral Home is assisting the family with the arrangements, which are incomplete.

In lieu of flowers donations may be made to the Monastery of St. Clare of Jamaica Plain or the Paralyzed Veterans Association.