Westborough – The Westborough High School cafeteria was bustling with holiday energy on Dec. 17 as over 100 children and adults came together to celebrate the Big Brothers Big Sisters (BBBS) Central Mass./Metrowest program’s Christmas party.

The party was held for the organization’s volunteer mentors, the “Bigs,” and the children they are matched up with, the “Littles.” Kids who do not yet have matches were also invited to partake in the day’s fun.

During the party, the Bigs and Littles took a few moments to describe what it has been like for them to be in the BBBS program.

David Russo, 15, of Worcester, has been partnered with Shrewsbury resident Paul Boehnke for the past four years.

“Sometimes we just hang out at my house,” Boehnke said. “We also go to [Worcester] Sharks games. And I also took David to his first Red Sox game this past summer.”

“We have a lot of fun together,” David said. “It’s been awesome doing things with [Boehnke].”

Zaiden, a seven-year-old boy from Marlborough, who is currently on the BBBS-match waitlist, was also at the party.

Zaiden, who aspires to be a fireman someday, noted that he had “been good – mostly” in the weeks leading up to Christmas.

“Hopefully, I’ll have a Big Brother soon,” he added.

Jonathan Giovannucci, 14, from Grafton had only been matched up with Westborough resident, Jon Ryan, for about six weeks or so but already the two realized they had much in common.

“We both like the outdoors in general,” Ryan said. “And we have sarcasm as a bond, too.”

Jonathan noted that ever since his father passed away two years ago, he had wanted “someone to be able to talk to and help with things.”

He said that Ryan provides that guidance, as well as being someone to do fun activities with, like playing paint ball.

For his part, Ryan said being a Big Brother is “selfish – cause it gets me out of the house and I have fun.”

On a more serious note, he added, “You want to help every kid, but realistically, you can only help one kid at a time.”

During the party, he and Joanthan were hanging out with Noah Benoit, a 13-year old from Worcester.

Noah has been on the waitlist for some time, he said, but he too was hopeful that he would soon find a Big Brother who would be a good match for him.

One party volunteer, Sasha Neal, said it was important to her to be there that day; she had been a “Little” since she was six years old. Now that she is 21, she said she still gets together with her Big, Sue Halvorson.

“Having a Big Sister really changed my life,” Neal said. “I came from a low-income situation but she helped show me a way out.”

Although one guest arrived late to the party, but was still given a warm welcome. That, of course, was Santa Claus. And for the day’s grand finale, 20 kids won a raffle prize – a new bike.

According to Erin Harper, the chapter’s communications and program specialist, over 1,380 kids from 40 communities participate in the Central Mass./Metrowest chapter. The program serves both girls and boys but there is an urgent need for more male mentors, she said.

For more information about becoming a mentor, go to www.bbscm.org or contact Harper at [email protected]. 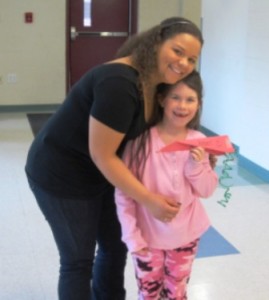 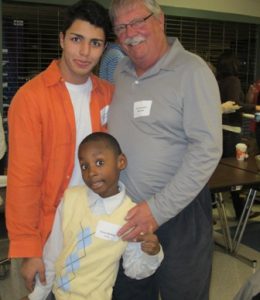