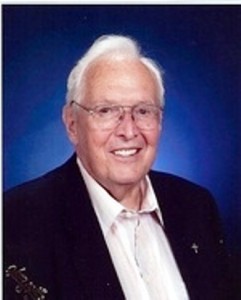 During WW II he served with the United States Navy as an Aviation Machinist's Mate Second Class.

John was the president and founder of Dover Instrument Corp. in Westborough. He founded Dover Instrument in 1963 in Waltham, growing the company from a three-man startup to a global leader in the field of air bearing technology-based precision manufacturing. John moved the company to Westborough in 1979, eventually employing over 150 people, many from the town of Westborough and surrounding towns. None of this would have been possible without the constant support of his loving wife, Shirley.

John was an active member of the Congregational Church of Westborough, a member of Siloam Lodge AF & AM, the Westborough Food Pantry, Habitat for Humanity, a charter member of the Central Massachusetts Model T Club, the Model A Ford Club of America, the United Way of Westborough, and the Men's Lunch Bunch.   Being the eternal optimist, he was always looking forward to his next antique car trip – destination unknown.

A memorial service will be held on Friday, Jan. 27, at 11 a.m. in the Congregational Church of Westborough, West Main St., Westborough. Burial in Pine Grove Cemetery will be private. There are no calling hours.

Funeral arrangements are under the direction of the Rand-Harper-Pickering Westborough Funeral Home, 62 West Main St., Westborough.