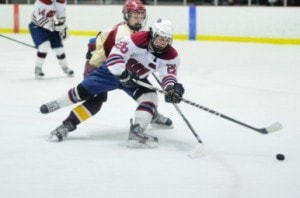 Region – Westborough High School (WHS) senior forward Nick Ferretti (#28, front) unleashes his shot despite the efforts of Algonquin Regional High School (ARHS) junior defenseman Christopher Lewis (#17, behind Ferretti) during their game Feb. 1 at Northstar Rink in Westborough. Both teams came out skating fast and furiously, and neither scored in the first period. In the second, Ferretti scored twice to put WHS up 2-0. ARHS's Will Dewsnap scored in the third period, but Ferretti then scored again for a hat trick and the final score of 3-1.