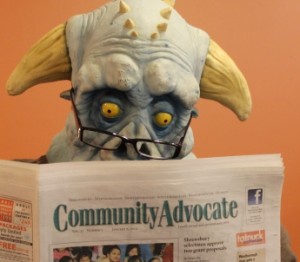 Recently I have been thinking about traffic – a lot of the time while actually sitting in it. But I have also attended several meetings where government officials from various groups have spoken at length about the state of our roads, the lack of money to fix them and what they hope will happen in the future so they can be fixed. To summarize it up, it's not good.

Fortunately for me, I don's have to drive on the major roads such as 128 or the Mass Pike on a regular basis. Those are pretty much a nightmare on any given day or night. The Pike especially is frustrating to me. I read once that to retrofit each of the toll booths to accept the EZ Pass would cost about $4 million. Because that is deemed too much, officials instead think it's a better idea to leave it as is. This results in cars weaving in and out to get to the right toll booth and then weaving around to exit.

It is so much nicer once you leave Mass. and go through other states. In New Hampshire they have this aerial bar-type thing which can scan your EZ pass. Not only do you not have to stop, you don's even have to slow down. Maine does not have that but they do accept the EZ pass at all their booths.

(And do not even get me started on how unfair it is that we, in the west, have to pay tolls but all our friends going into the city from the south do not!)

Locally the roads aren's as bad as the highways, but it can still be at times incredibly aggravating. I live in Upton – we only have two traffic lights, of which only one is really busy.

But every time I leave that small town, to travel onto Routes 140 or 20, I never know what will happen. And I hate Route 9! What is more frustrating than driving along, then realizing because you were “zoning,” you missed your exit. True, it's your own darn fault but still. Your penance is to go miles and miles and miles before you can turn and circle back.

Is there a more horrible intersection in America than Route 9 and Lyman Street in Westborough? I dread every time I have to go near there. But it's no better crawling along Route 30 at rush hour, either. I also get extremely frustrated in Shrewsbury center. Going in and out of the Shrewsbury Public Library, which is right there at the intersection, is also an unpleasant experience at times.

Sometimes I wonder what will happen when the nearly 10 percent of the population that is still unemployed goes back to work. If rush hour is bad now, what will it be like with all those extra vehicles?

But at the route (no pun intended) of this whole mess is, of course, money. So many roads are just in such bad shape. Some roads were repaired over the past few years with monies from the American Recovery and Reinvestment Act of 2009. But as always, there just wasn's enough to fix everything.

Somehow, someway, someone has got to come up with a plan. Because we need our roads to be in good shape – they are the literal lifeline of our economy.

And for me personally, I am also hoping that a Jetsons-like back pack will soon be on the market so I can just fly to where I need to go!