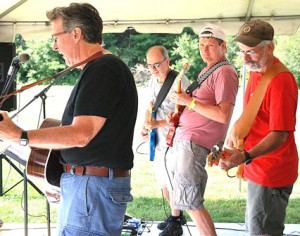 Hudson – Guests attending the Hudson Education Foundation's (HEF) first “HEFfer Fest,” a barbecue competition and food festival held Sept. 8 at the Hudson Elks Pavilion, weren's concerned about health risks when it was announced the event had Staff Infection. It's the name of an all-faculty rock band including JFK Middle School Principal Brian Daniels on guitar and vocals.

“We were brainstorming and the play on words made us laugh,” Daniels said of the band's offbeat name.

When the band formed in 2008, Daniels taught social studies at HHS. In 2009, he moved to the middle school as principal and welcomes the rehearsals to stay in touch with the HHS staff.

“It's a chance to stay in contact with dear friends and great professionals,” he said. “It's the joy of music, and the joy of camaraderie and friendship.”

They rehearse nearly weekly throughout the year.

Staff Infection debuted at HHS in “Hudson's Got Talent,” entertaining the audience while judges voted on the students” acts. Among the songs they presented were “Midnight Train to Georgia” and “Who'sl Stop the Rain.”

“We got a great reception from the students that night, with cell phones waving in the dark,” Daniels recalled. “We originally planned to get together just to do that show, but we enjoyed it so much that we decided to continue.”

The band has performed in the annual talent show each year since. They'se also appeared on local stages at Harvest Café in Hudson and Williker's Tex-Mex & BBQ in Shrewsbury.

Daniels particularly enjoyed their outdoor concerts in 2009 and 2010.

“We performed outdoors at Wood Park twice,” he said of the Hudson venue. “Those shows were great fun and well attended.”

Those shows have also been seen by students at JFK Middle School, thanks to the town's public-access television.

“HUD-TV seems to run a tape of those concerts on a continual loop,” Daniels said. “Students say, “Mr. Daniels, I think I saw you on TV.” I'sl ask, “You mean on TV in a School Committee meeting?” They'sl say, “No, you were in a band.” I'sl tell them, “Yes, I's in a band – and that's why you should learn to play a musical instrument, too.””

The band's diverse repertoire includes songs by classic rock acts such as the B-52s, Jimmy Buffet, Creedence Clearwater Revival, the Rolling Stones, and the Ike and Tina Turner Revue.

“If somebody wants to do a song badly enough, we figure a way to do it,” Daniels said.

It was fitting that an all-faculty act entertained at the HEF fundraiser. The foundation provides grants to the town's schools for enrichment programs the district cannot afford.

For several years, HEF has funded a visit by Japanese author Yoko Kawashima Watkins to JFK Middle School, where sixth-graders annually read her book, “So Far From the Bamboo Grove.” The author discusses her childhood experiences in Korea during World War II with the students.

“As teachers – in and out of the district – we want to support anything that brings attention to education,” Daniels said. “And we appreciate the parents who put in all the volunteer time to make this event work. And the funding they give to support teacher projects that wouldn's be possible otherwise is very much appreciated. Performing at this event is a small way for us to give back a little bit.”

For information about HEF, visit www.hefoundation.org.